Insider writes the book on healthy marriage and family 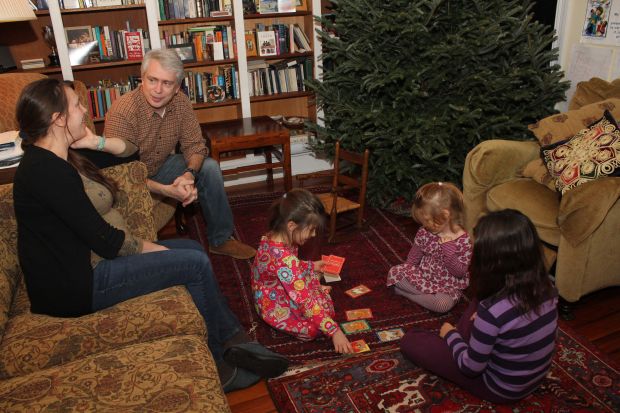 The Roberts family, members of Our Mother of Consolation in Chestnut Hill, relax before Christmas in their home. (Sarah Webb) 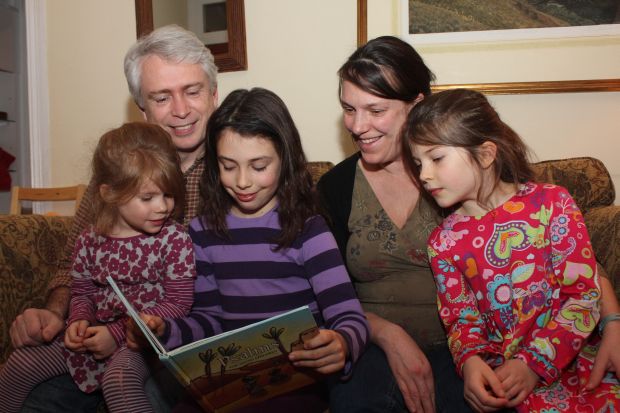 “We believe that love is our mission, and that mission is the only way we can be fully alive and be who we were created to be. We believe this love should be taught, shared, and communicated in and through the family, the domestic church.”

This line is taken from the summary statement of “Love is Our Mission: the Family Fully Alive,” the preparatory catechesis for the World Meeting of the Families that will be held in Philadelphia next September. Many parishes are using it as a study guide as they prepare for the historic event.

The catechesis, which is a joint effort of the Pontifical Council for the Family and the Archdiocese of Philadelphia and published by “Our Sunday Visitor” newspaper, represents the work of a number of theologians.

Chief among them is Christopher Roberts, a member of Our Mother of Consolation Parish in Philadelphia’s Chestnut Hill section who was ultimately charged with putting the catechism together.

Roberts brings a number of skills to the table. He is a trained theologian with a Ph.D. in Christian ethics, he has the zeal and fire of a convert to Catholicism, and for him, Christian family life is not an abstract study.

He and his wife Hannah are the parents of three young children — Martha, 9; Ruth, 6; and Sarah, 3 — with a fourth joyfully expected in the very near future. Hannah recently authored, along with Betsy Puntel, “A Child’s Book of the Mass,” published this year.

Growing up in Baltimore, the son of a Baptist minister and educated in Quaker schools, Roberts, now 45, could not possibly have imagined he would someday be a Catholic theologian.

His undergraduate degree at Yale was in environmental studies and religious studies, but his bent was toward the liberal arts end of it. So when the opportunity for a scholarship at Oxford University arose he accepted and was off to England for an a master’s in theology and ethics.

That’s where he met Hannah, who was also studying at Oxford.

She was a cradle Catholic from Yorkshire, that corner of England where the Catholic faith, watered by the blood of such martyrs as Margaret Clitherow, was never really extinguished during the Protestant Revolution.

Their denominational differences were not a factor, and 17 years ago they married at a Benedictine monastery. At times they would attend Catholic Mass, other times a Protestant service. The truth is, although committed Christians, they were searching.

Roberts’ first nudge toward Catholicism came through an Anglican Mass he attended while at Oxford. “Everybody got down on their knees to pray, I had never knelt to pray in my life,” he recalls. “It was so jarring to me, so intimate. It kind of exploded in me. It made my heart so vulnerable and that began a long attraction to sacramental worship.”

It was a family crisis in 2002 that ultimately brought him to Catholicism. He and Hannah were generally attending evangelical services, when the sudden death of Hannah’s father really affected her. He instinctively felt Hannah could receive most comfort through the faith of her birth and they began attending Mass regularly.

One Sunday a priest from Ghana was the celebrant. The text of the Epistle was from Acts 6, where a dispute arose over the equitable distribution of alms to the widows. The theme, as it was developed by the homilist, emphasized that from the very beginning there were conflicts in the church but because Christ is with the church, they were overcome and that remains true today.

“That took the wind out of my sails. I thought, ‘You are right, Jesus is with the church,’” Roberts recalls. Any latent bias against the Catholic faith fell away, and this coupled with a desire for Eucharist made him determined to become Catholic, which after formation he did in 2005.

Perhaps coincidentally, that same text from Acts has further influenced his life. It is really an account of the creation of the Order of Deacons, which is actually older than the Order of Priests. At this time Roberts is three years into his formation for the permanent diaconate and is scheduled to be ordained three years from now.

In his professional life, he worked in research for the Public Broadcasting Service (PBS), continued his education toward a Ph.D. in religion and ethics at Kings College, London, and he was a religion editor and correspondent for the PBS program, “Religion and Ethics NewsWeekly.”

The family moved to Chestnut Hill in 2000 and he taught ethics at Villanova University for four years. In 2008 he published a book, “Creation & Covenant: The Significance of Sexual Difference in the Moral Theology of Marriage,” and he has been published in several magazines include Commonweal and First Things.

In all of his work, Hannah plays a significant part. “My wife has a degree in theology too,” he said. “She is my constant partner and proofreader. I write about family life, she lives it.”

In his writings, including the catechism, Roberts said his goal is “helping people connect their faith to their everyday life; helping people to see the theological foundation to the way life goes.

“I pray,” he said, “with all my mind the World Meeting of Families will be a spark that revitalizes the Church in Philadelphia, which, let’s be honest, is hurting in many ways.

“I hope the papal visit will reanimate Catholic life in Philadelphia. What a privilege it is to be part of that.”

It’s not just married life, Roberts believes. “I really think a wise, healthy celibate and a healthy marriage have a lot in common,” he said. “Whether it is marriage or celibacy you are following the way of the cross.”

PREVIOUS: Pregnant at 16, Anne chose adoption for her baby

NEXT: Special parents see the blessings of raising special twins