Pregnant at 16, Anne chose adoption for her baby 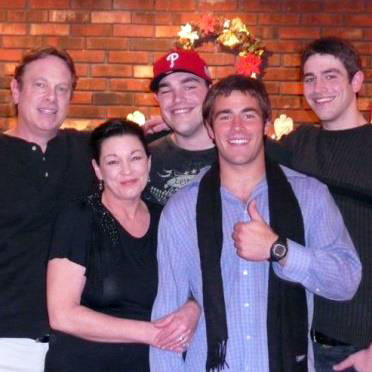 When you are 16 everything is a crisis, whether it is a zit in the mirror, a fight with a friend or flunking a math test. But if you are a girl, the mother of all crises at that age is flunking a pregnancy test.

It really is life-changing and you know it; but first things first — how do you tell Mom and Dad?

That’s what Anne Hinnegan faced, when she was Anne Krumm and a student at Upper Moreland High School during the turbulent 1970s. The bottom of her world literally fell out.

“It was devastating,” she remembers. “Telling one’s parents is something anyone would dread. I told my mom and she told my dad.”

The first thing to do was to examine the options. Abortion had been legal for a few years then and Anne knew of girls at school who had had an abortion, some more than one. But it never even entered her mind as solution.

The father of the unborn child was much older than her, away in the military and not even in her life, nor at that point did she wish him to be.

Luckily for Anne her parents, Jack and Ann, were very supportive. She was a member of a strong Catholic family, where she was the youngest of four and the only girl. Her mom, who was active in the pro-life movement, contacted a local chapter of Birthright and had a serious talk with her, suggesting she have the baby and immediately release him or her for adoption.

“Mom was so influential with me; she let me know how difficult life would be if I kept the baby. She said she would help me raise the baby, but common sense said, I should finish high school, get a job, eventually marry and raise a family.

Back then, teen pregnancies were considered much more scandalous then they are today,” Anne said.

Her family was put in touch with St. Vincent’s Home, a Catholic facility in Miami conducted by the Sisters of Mercy where young girls lived and were cared for until their baby was born.

Meanwhile, Anne told absolutely no one, not even her best friend, because she didn’t want her to have to lie about the reason she was leaving school. The story was she was going down to Florida to help relatives where the mother had just died.

Anne and her mom flew down to Miami to make the arrangements. Normally the charge was fairly expensive, but because her dad had just been laid off, there would be no charge.

As Anne remembers it there were about 30 girls in residence at St. Vincent’s from all over, and a couple of them couldn’t speak English. The first few weeks were rough; she missed her family and friends, and group living takes getting used to.

“We had chores; we had kitchen duty, laundry duties and roommates you had never met. There were three main nuns who were most involved with us — Sister Marlene Loretta, Sister Loretta and I think Sister Benedictine. One was good cop, one was bad cop and one was medium cop.

“It was amazing how well we girls got along so great. We played cards together, crocheted and other little activities they had for us. To this day one of my best friends was my roommate, we still get together, and I would not have her in my life if it weren’t for that.

There were even tutors to keep the girls up on their schooling, so after they went home they would not be behind. And of course, being Miami there were also occasional excursions to the beach. “We would get a lot of stares,” she recalls, “with about 25 girls all together and all pregnant.”

When Anne’s time for delivery came her mom flew down again to be with her. The baby was a little girl, and although her mother saw her, Anne chose not to. She was afraid if she did she would never be able to sign the adoption papers.

She went back to high school for her senior year with her class, and yes, there were rumors but nothing else.

It is only in recent years that she had opened up to her friends about that missing year.

In good time she met her future husband, Patrick, when they were both musicians in a rock band. Well before their marriage she told him about her teen pregnancy.

“He is a faithful Catholic and he was happy I did what I did,” she said. “He had actually dated a girl who told him she’d had an abortion and he wasn’t happy about that. He told me he was proud of me.”

Anne was 23 when they married and now they have three grown sons, Patrick, Andrew and Sean. When they were of proper age, she also told them about her experience.

Looking back, it all happened in the wink of an eye. Since then she has experienced real tragedies and hardships including the death of her beloved parents and one of her brothers, the death of a good friend at age 23, and all of the hardships that come with raising a family.

In 1985, after Andrew was born, she got involved with the pro-life movement and is now the event coordinator, office manager and volunteer coordinator for the Pro-Life Union of Greater Philadelphia. Just this year she shared her story publicly through the organization’s Monthly Update chiefly to highlight adoption to girls with unplanned pregnancies.

Last month she received the Pro-Life Union’s John Paul II Award at the group’s annual Stand Up For Life Dinner.

“This past Mother’s Day Anne took a particular leap of faith and shared the story of placing a daughter for adoption at age 17,” the program book explained. “Adoption is sometimes overlooked as an option because so many people do not understand adoption or the tremendous impacts it has on so many lives.”

Anne knows the decision she made to give up her child was the right one, and she has never sought to make contact.

“I’ve looked a little bit on the Internet to see if she was looking for me, and if she was, she could find me,” Anne said. “I would be open to that, especially if she wanted our family’s medical history. I wonder all the time how she is. I pray she is faithful and happy and if she has children they are healthy.”

At the Pro-Life Union, sometimes girls are in the same situation she faced, and they are counseled by Edel Finnegan, the executive director. Some were already considering an abortion and it is a joy to her when they decide against it.

Anne’s advice is, “Even if you think when you tell your parents they will be really angry with you, nine times out of 10 they are not. You think they will never get over it, but that doesn’t happen.

“I gave that little girl life. Now she is a woman, and I’m sure she has given great joy to her mom and dad.”

PREVIOUS: What Mom’s love can do

NEXT: Insider writes the book on healthy marriage and family