Aceh Catholics say Shariah expansion has had little impact on them 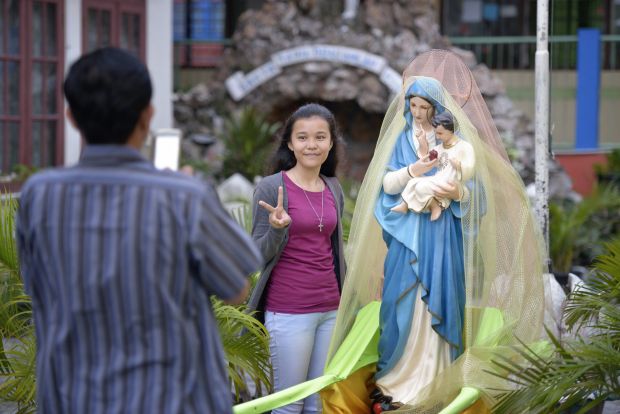 Yunira Almaisa Brigita Sianipar poses with a statue of Mary and Jesus at Sacred Heart Catholic Church in Banda Aceh, Indonesia, Oct. 31. An expansion of public flogging to include non-Muslims has had little impact on Catholics in IndonesiaÕs conservative province. (CNS photo/ Paul Jeffrey)

BANDA ACEH, Indonesia (CNS) — An expansion of Islamic law, Shariah, to include non-Muslims has had little impact on Catholics in Indonesia’s conservative Aceh province.

“Until now no Catholic has been punished for violating Shariah Law. And I hope that doesn’t change in the future,” Father Hermanus Sahar, pastor of Banda Aceh’s Sacred Heart Catholic Church, told Catholic News Service. However, he said he does caution female parishioners about dress.

Father Sahar, who said he has yet to witness one of the public floggings carried out under auspices of the religious law, said he doubts the practice is necessary.

In a series of moves beginning in 2001, the central government in Jakarta granted permission to Aceh to implement elements of Shariah. The concessions were designed to quell separatist sentiments.

Aceh is the only one of Indonesia’s 34 provinces that can legally adopt local regulations derived from Shariah. Officials have created a special Shariah police force to enforce the special laws, which particularly focus on gambling, alcohol consumption, sexual activity and clothing considered immodest.

Roughly 90,000 non-Muslim Acehnese, mostly Christians and Buddhists, as well as domestic and foreign visitors to the province, have been considered exempt from the Shariah provisions. If arrested on any charge, they could simply request that their case be handled under the national legal system. 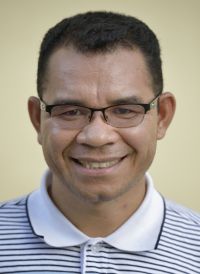 Yet on Sept. 27, the provincial legislature expanded the religious law to outlaw homosexual activity and adultery. Up to 100 lashes and 100 months of prison can be imposed for consensual same-sex sexual activity, while adultery carries a penalty of up to 100 lashes. As these new crimes are not part of national law, even non-Muslims caught violating them would be subject to the Shariah provisions.

“The two new bylaws deny people in Aceh the fundamental rights of expression, privacy, and freedom of religion,” said Phelim Kine, deputy Asia director of Human Rights Watch. “Criminalizing same-sex relations is a huge backward step that the Indonesian government should condemn and repeal. Whipping as punishment should have been left behind in the Middle Ages.”

The new laws also have drawn fire for discriminating against women. A man charged with rape, for example, can legally defend himself simply by repeating five times a special oath declaring his innocence.

Provisions about immodest clothing, while gender neutral on paper, are usually employed solely against women. Roadblocks by the Shariah police regularly stop and warn women without a veil or wearing tight clothing. According to provisions in the local law, after three warnings they can be flogged publicly.

“At first I was afraid of the Shariah police, but not now,” said Maria Susanti Bachtiar. “I never wear a veil, and if they stop me I just say I’m Catholic and show them my crucifix, and they let me go.”

Nonetheless, Father Sahar says he cautions his female parishioners about their dress.

“I tell women in the church to wear decent clothes if they go out. They don’t have to adopt the view of the larger society, and they don’t need to wear a veil, but if they dress decently they’ll avoid trouble,” he said.

The expansion of Shariah, particularly the public floggings, has not been championed by all Muslims in Aceh.

Fuadi Abdullah, a lecturer in Islamic law at the Serambi Mekkah University in Banda Aceh, said the intent behind public punishment is good.

“The people think flogging is more effective than sending people to prison. When someone is flogged in public, it’s not just a matter of physical pain. The real punishment is social shame. With the community watching, the person is ashamed and changes their behavior,” he said.

Yet Abdullah said that in practice it hasn’t worked, in part because of unequal application.

“People are punished for gambling and drinking, but when they caught a military officer doing those things, they decided that Shariah law didn’t apply to him,” he said. “And when a woman in Langsa was detained for riding a motorcycle with her boyfriend in 2010, she was raped by the same police who detained her. When the people enforcing Shariah law behave like that, how can the community trust them?”

Raihal Fajri, executive director of the Katahati Institute, an Aceh-based organization advocating for democracy, said the focus on flogging misses the emphasis of the Prophet Muhammad on forgiveness.

“The Prophet teaches us that if we understand we’re wrong, then punishment isn’t necessary,” she said. “Islam is a religion of peace. If I understand I did something wrong, it offers me forgiveness. The Prophet teaches us that we can’t punish in a hurry. We must be patient. But today when we catch people, we rush to judgment and flog them. That doesn’t mean that cases of misbehavior decrease. Flogging simply isn’t effective. It’s not making misbehavior decline.”

According to several witnesses, the public floggings have occasionally backfired on authorities. In one incident, a man who was about to be flogged in Banda Aceh yelled to the crowd that his punishment was unfair if the region’s political leaders were not held accountable for corruption. The crowd cheered in response.

The stricter enforcement of Shariah marks a strengthened political role for Islamic fundamentalists in Aceh. Non-Muslim religious groups are not being granted permits for new construction of new buildings, and non-Muslims often get second-class treatment in government offices.

“If you’re a woman without a veil and you go to a government office, you may have to spend all day waiting, while a Muslim with a veil will get treated normally,” Father Sahar said.

The priest said such discrimination has its benefits, however.

“That treatment strengthens us as a community, because it encourages us to support each other even more. There’s some anxiety, however, some fear that Islamic hardliners might someday make life difficult for us. Yet I remain hopeful that’s not going to happen,” he said.

NEXT: Pope, religious leaders pledge to work together to end slavery by 2020