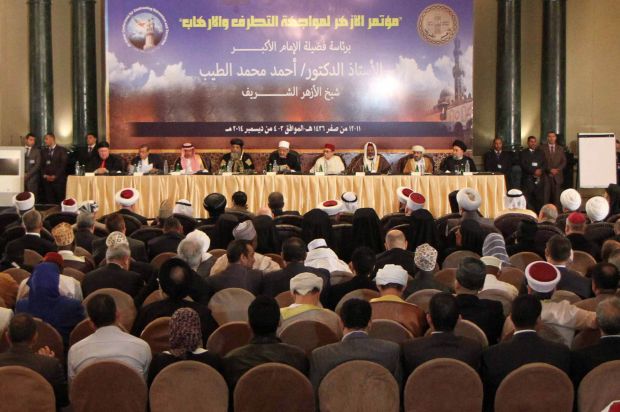 BEIRUT (CNS) — A Lebanese archbishop expressed optimism regarding the outcome of an international conference on terrorism and extremism, but said it could take decades to see results.

Maronite Archbishop Paul Matar of Beirut praised the final statement of a conference in Cairo organized by Al-Azhar University, Sunni Islam’s leading institution of higher learning. Around 600 Muslim scholars from 120 countries, as well as representatives of Eastern churches, gathered for the conference.

The conference statement said, among other points:

— “It was necessary for Al-Azhar, given its religious significance to all Muslims, to take the initiative to speak out loudly in the name of Islam against extremism and terrorism of all forms and to point out the concepts and rhetoric that extremists have manipulated to justify their terrorist acts.”

— “The displacement of Christians and other religious and ethnic groups is a crime that we all agree to condemn.”

— “Muslims and Christians in the East are brothers; they belong to one civilization and one nation; they have lived together for many centuries; and they should continue to live together in national, sovereign and free states, achieve the equality of all citizens and respect freedoms.”

— “The multiplicity of religions and sects is not a new phenomenon in our shared history; this diversity was, and will remain an indispensable asset for the world. History bears witness to that.”

Commenting on the Al-Azhar statement, Archbishop Matar told CNS that “if Muslims will accept those ideas, (then) those ideas will work, little by little, in transforming mentalities.”

But he stressed that it will take time.

“This final statement needs maybe 20 years to be rooted in reality. We need a new spirit, a new situation. It’s not something that will be accomplished overnight,” Archbishop Matar said.

He likened the process of Muslims accepting the ideas outlined in the statement to a synod in the Catholic Church, after which “we work on the reception of the new teaching.”

What is required to fight extremism and terrorism, Archbishop Matar said, is to educate people — in schools, in universities and through public opinion — and to teach the new generation “about the essentials of Christianity and Islam and about coexistence and give an opportunity to those fundamentalists to come back to their senses.”

“Guns and military solutions” are not the answer, the archbishop said.

The content of the statement gives hope not just for Christians but for the Middle East, and for Muslims, too, Archbishop Matar said. “Their (Muslims) image in the world now is very bad. Islamophobia is growing fast in the West.”

One-third of the Muslim population lives outside of Islamic countries, the archbishop noted.

“If there is a problem between Muslims and the world, then 500 million Muslims will have problems in the world,” he said.

Archbishop Matar spoke at the Al-Azhar conference Dec. 3, and he outlined for CNS some of the key points of his speech. He said he focused on the historical good relationship between Muslims and Christians.

Dating back to the beginning of Islamic history, Archbishop Matar pointed out, the Quran never referred to minorities. Instead, he said, the Quran spoke about the “people of the (religious) book” which means the Bible and the Quran.

“That means, that in the spirit of the Prophet Muhammad, that we are accepted as Christians,” Archbishop Matar explained. “The Prophet Muhammad even received Christians in his house. He gave them the possibility to pray in his own house. This is true.”

“So if the prophet did that, that means that all the Muslims must also accept coexistence with Christians,” he said.

In his speech, the archbishop also noted that the Quran states that nobody can impose religion on anybody.

“That means there is to be freedom of conscience,” he said.

“So what happened in Iraq is unacceptable in the name of Islam, in the Islamic religion. It’s very important to state that, because Daesh (a loose Arabic acronym for the Islamic State group) are operating under the false pretense that the Quran gives them the right to expel Christians. So what they are doing is against Islam,” Archbishop Matar said.

“Each one of us, in turning to our mistakes, can find peaceful attitudes and build a peaceful relationship among us,” Archbishop Matar recounted. “This returning to the essence of Christianity and Islam is very important.”

He also reminded the attendees in his speech that the Second Vatican Council invited Muslims and Christians to forget the past and to create a new chapter of understanding and dialogue.

PREVIOUS: As nuns face off against traffickers, priests asked to join the fight

NEXT: Pope to create new cardinals in February