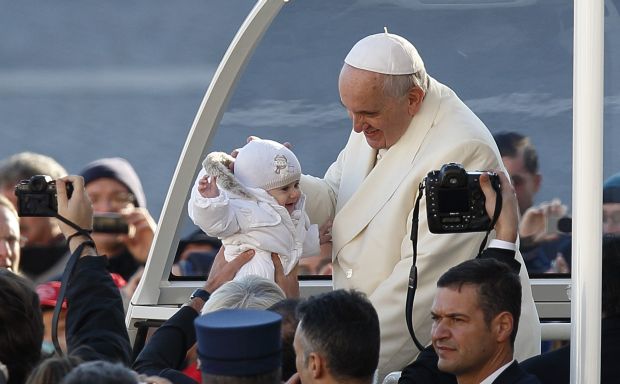 Pope Francis greets a baby during his general audience in St. Peter's Square at the Vatican Dec. 10. (CNS photo/Paul Haring)

VATICAN CITY (CNS) — The October extraordinary Synod of Bishops on the family was not the scene of “a clash between factions, but of a debate among bishops,” a work that will continue with the 2015 general synod “for the good of families, the church and society,” Pope Francis said.

Announcing a new series of Wednesday general audience talks about the family, the pope insisted Dec. 10 that no one at the extraordinary synod “called into question the fundamental truths about the sacrament of marriage: its indissolubility, unity, fidelity and openness to life.”

“Some of you might ask me, ‘But, father, didn’t some of the bishops fight?’ I wouldn’t say ‘fight,’ but they did speak strongly, that’s true. This is the freedom that exists in the church,” the pope said to the applause of the crowd gathered in St. Peter’s Square.

“I asked the synod fathers to speak with frankness and courage and to listen with humility — to say everything that was in their hearts with courage,” he said. “There was no pre-censorship at the synod. None. Everyone could, or better, had to say what was in his heart, what he really thought.”

Pope Francis told people at the audience that no one should be surprised or scandalized that the bishops at the synod had different opinions on certain issues; that is part of Christian history, he said.

The day’s audience began with a reading from the 15th chapter of the Acts of the Apostles describing how Jesus’ disciples wrestled with questions regarding the conditions placed on non-Jews who wanted to join the Christian community.

The disciples had a “strong debate,” the pope said, “they were shouting at each other. Yes, the apostles, because they were seeking the will of God about the pagans, whether they could enter the church or not. It was something new. Always when one seeks God’s will in a synodal assembly there will be different points of view and debates. That isn’t something bad as long as it is done with humility and with an attitude of service.”

Pope Francis thanked the news media for the “abundant” coverage of the synod, but he told the thousands of pilgrims and visitors at the audience that “frequently the view of the media was a bit in the style of sports or political coverage: There was much talk of two teams, for and against, conservatives and progressives, etc.”

Instead, he said, every bishop spoke from his heart and his experience; “it was edifying” to see how everyone listened.

The synod’s midterm report — which raised controversy for how it seemed to seek out positive values in the relationships of people living contrary to church teaching, for example, those cohabitating or in same-sex relationships — was just “a draft,” the pope said.

In small groups, the bishops worked on rewriting the draft — and their reports were published to ensure “transparency,” he said. The reports were the basis for the final report, which kept the midterm report’s framework: “listening to reality, looking at the Gospel and making a pastoral commitment.”

The final report, the shorter message to the church and the pope’s own final speech, he said, were the only “official documents” from the synod.

The church’s reflection on the mission of families in the church and the world and the challenges facing the family today continue with the publication Dec. 9 of preparatory document for the 2015 general synod, he said.

In dioceses around the world, he said, the preparatory document with its 46 questions will be an instrument to ensure “the work of prayer, reflection and fraternal discussion continues with the aim of preparing for the next assembly.”

Pope Francis asked Catholics to join him in praying that “Mary would help us make the decisions necessary to provide more and better assistance to families.”

PREVIOUS: Do not be complicit, indifferent to tragedy of exploitation, pope says

NEXT: Speaking of families, pope is eager to join them in Philadelphia