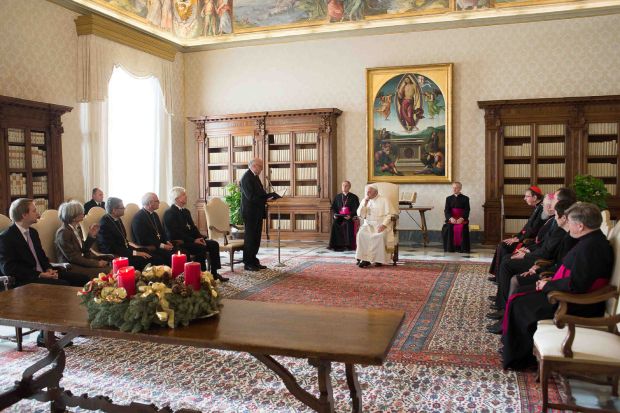 Pope Francis attends a special audience with members of the German Evangelical-Lutheran Church at the Vatican Dec. 18. (CNS photo/L'Osservatore Romano via Reuters)

VATICAN CITY (CNS) — Christianity has something to say about human dignity, and “it would be a shame” if differing positions on the sanctity of all human life or on marriage were to increase the divisions among Christian churches and communities, Pope Francis said.

“Questions related to the dignity of the human person at the beginning and end of life, as well as those related to the family, marriage and sexuality, cannot be concealed or overlooked just because we do not want to jeopardize the ecumenical consensus already reached,” he said Dec. 18 during a meeting with German Catholics and Lutherans.

“Ecumenical dialogue today can no longer be separated from the reality and lives of our churches,” the pope told leaders of the German Lutheran Church and members of the German Catholic bishops’ ecumenical commission.

Pope Francis praised the German Catholic-Lutheran dialogue commission for its joint study on “God and human dignity,” a study which is drawing to a close.

Different theological understandings of the church and different opinions about what would constitute unity also seem to be moving Christians further from one another, Pope Francis said; but instead of resigning themselves to their divided state, “we must concentrate on the next possible step.”

After 50 years of formal dialogue he said, “the notable progress that, with the help of God, has been made is a solid foundation of sincere friendship lived in faith and spirituality.”

The mutual esteem, the recognition that Catholics and Lutherans share the basics of Christian faith and that they can pray together, he said, will determine how they mark together the 500th anniversary of the Protestant Reformation.

The anniversary in 2017 will be the occasion “for the first time to share in one ecumenical commemoration throughout the world, not in the form of a triumphalistic celebration, but as a profession of our common faith in the one and triune God.”

The centerpiece of the commemoration, he said, will be “common prayer and the heartfelt request for forgiveness from our savior Jesus Christ for our mutual sins, as well as our joy for being able to share the ecumenical journey.”

Pope Francis prayed that the preparations for the anniversary and its commemoration “will encourage us all, with the help of God and the support of his Spirit, to take further steps toward unity and not limit ourselves simply to that which we have already accomplished.”

PREVIOUS: Christmas is a sign that God works in history to save people, pope says

NEXT: ‘Happy’ about warming of U.S.-Cuba relations, pope praises diplomacy