Manila cardinal: Seek forgiveness for not taking care of environment 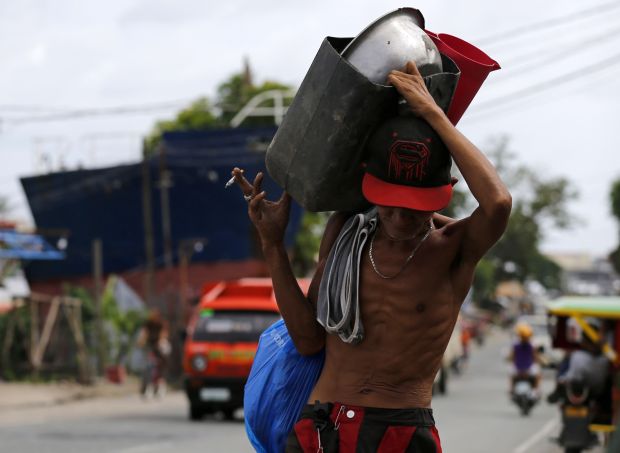 A man in Tacloban, Philippines, carries his belongings in anticipation of an approaching typhoon Dec. 5. (CNS photo/Francis R. Malasig, EPA)

MANILA, Philippines (CNS) — Manila Cardinal Luis Antonio Tagle told churches to pray for safety and forgiveness for not taking care of the environment ahead of a powerful typhoon approaching the Philippines.

In putting out the “oratio imperata” (Obligatory Prayer) Dec. 5, Cardinal Tagle also told the faithful to brace for Typhoon Hagupit without panicking and by monitoring government warnings and advisories. He also said they should prepare with prayer.

“Let us humble ourselves and seek the mercy and compassion of God at this time of impending peril and destruction,” he wrote in a statement.

Last year Typhoon Haiyan was the strongest cyclone on record. It brought 195-mph winds to the central Philippines and churned out 15-foot storm surges, leaving more than 7,300 dead or missing and destroying 1.1 million houses.

Many blamed climate change and the effects of global warming for the storm’s devastating impact. They said the earth’s rising temperatures made the ocean warmer, which in turn fueled this storm and other destructive cyclones.

Cardinal Tagle’s prayer starts with gratitude for God’s “wonders of creation.” But it also says, “We acknowledge our sins against (God) and the rest of creation. We have not been good stewards of (God’s) creation. We turn to (God), our loving Father and beg forgiveness for our sins.”

“Calm the storm and keep us all safe and far from harm these perilous days and always,” said Cardinal Tagle.

Cebu Archbishop Jose Palma also put out an “oratio imperata” related to Hagupit, which is expected to pass over Cebu province.