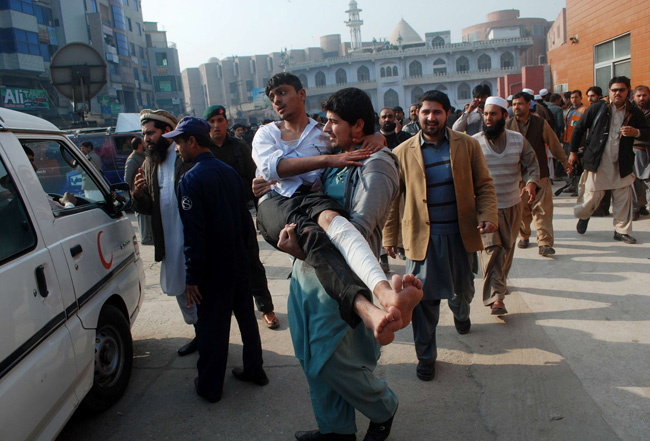 A man carries a student released from a hospital in Peshawar, Pakistan, after the Dec. 16 Taliban attack on the Army Public School. (CNS photo/Khuram Parvez, Reuters) 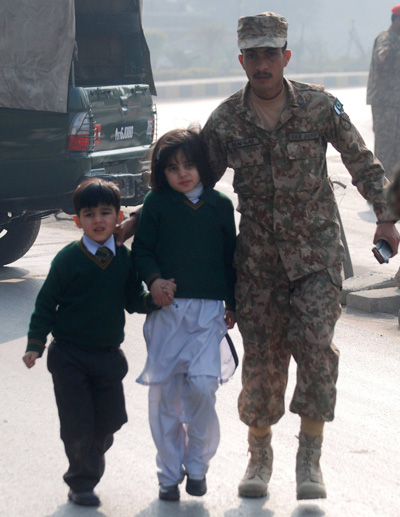 NEW DELHI (CNS) — The Catholic Church in Pakistan has joined the chorus of condemnation of the deadly attack by the Taliban on an army school in Peshawar that has left at least 126 children and others dead and 250 injured.

“This is a barbaric, inhuman and cowardly act,” Cecil Chaudhry, executive director of the National Commission for Justice and Peace of the Pakistan Catholic Bishops’ Conference, told Catholic News Service after the Dec. 16 attack.

“It is beyond imagination how innocent children of army personnel could be targeted like this,” said Choudhry.

News reports said the Pakistani Taliban claimed responsibility for the attacks, claiming it as “retaliation” for ongoing army operation against the insurgents in the tribal areas bordering Afghanistan.

The Pakistani Taliban claimed responsibility for the attacks, claiming it as “retaliation” for ongoing army operation against the insurgents in the tribal areas bordering Afghanistan.

According to South Asia Terrorism Portal, nearly 13,000 people have been killed in army operations from 2005 to February 2014 in Pakistan’s Khyber Pakhtunkhwa province with Peshawar as its capital.

Reports say casualties have been much higher with the Pakistani security forces stepping operation against the Taliban in 2014 in the porous border areas with Afghanistan.

Pakistani Prime Minister Nawaz Sharif, who rushed to Peshawar, described the attack as a “national tragedy.”

The massacre in the school, Choudhry said, “calls for addressing issues of linguistic, ethnic and regional diversities as one nation.”

He called it “unlikely” that the massacre was linked to the Nobel Peace Prize being conferred on Pakistani schoolgirl activist Malala Yousafzai a week earlier.

Malala was shot by Taliban gunmen in October 2012 for standing up for education of girls in the troubled province where Taliban opposes education of women.

“These are all our children who’ve been murdered today. My prayers and condolences are with the families,” tweeted Satyarthi, founder of the Save the Childhood Movement in India.

NEXT: Australians turned to prayer during siege, Sydney priest says