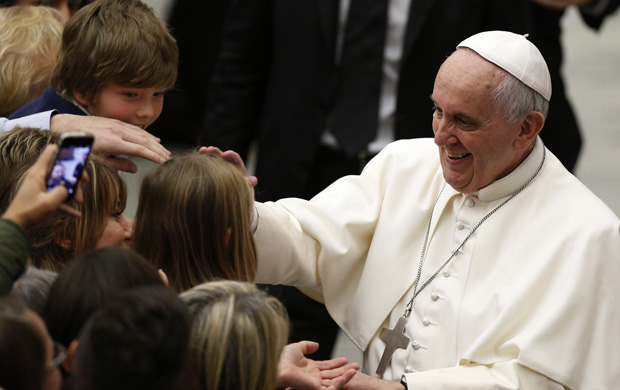 Pope Francis blesses a girl during an audience to give Christmas greetings to Vatican employees in Paul VI hall at the Vatican Dec. 22. (CNS photo/Paul Haring)

And leading by example, the pope asked everyone for their forgiveness — for any errors or shortcomings he and his “colleagues” may be guilty of and “also for some scandals that cause so much harm. Forgive me.”

The pope’s comments came during a special audience in the Vatican’s Paul VI hall Dec. 22. It was the first time the pope invited everyone who works at the Vatican, along with their family members and loved ones, to receive the pope’s pre-Christmas greetings. In the past, popes have held smaller annual gatherings with certain groups, like the Vatican police force, for a moment of reflection and thanks.

The pope continued to follow tradition with a pre-Christmas meeting earlier in the day with members of the Roman Curia — the church’s central administrative offices — as well as cardinals living in Rome and members of the papal household.

However, Pope Francis said he wanted to show his thanks and appreciation for all those who serve the church behind the scenes at the Vatican.

“I did not want to spend my second Christmas in Rome” without meeting the people whose hard work and dedication often go unnoticed, those who are “ironically defined as ‘the unknown, the invisible,'” like the gardeners, doormen and maintenance staff.

He told the employees that he had spoken with their bosses about the importance of all the many and different members living as one harmonious body united in Christ.

Everyone has a different and yet essential role to play, and sometimes “those parts of the body that seem the weakest are the most important,” he said.

While the pope had warned the heads of the Roman Curia against 15 “illnesses” to avoid in their work as leaders within the church, the pope talked to employees about the importance of care, by underlining the connection between the word “curia” and the Italian word, “curare,” meaning “to take care of” and “to heal.”

He asked that they use the Christmas season as an occasion “to heal every wound and to take care of every shortcoming.”

The first thing to take care of is one’s spiritual life — one’s relationship with God — because that is “the backbone of everything we do and everything we are.”

“Christians who do not nourish themselves with prayer, the sacraments and the Word of God inevitably shrivel up and run dry,” he said.

Employees must take care of their families, he said. Their focus should not just be to provide an income, but to give all family members “time, attention and love.”

He told everyone to ask themselves “Do I have time to play with my children or am I always busy and I have no time for them?” Playing with one’s kids is so important and “it’s so wonderful. It is sowing the seeds of the future,” he said.

Among the other things the pope listed that people must take the time to do in their lives:

— Take care of your relationships with others, transforming one’s faith into good works through one’s actions and words, especially toward the elderly, the homeless, the sick, the hungry and “the foreigner, because this is what we will be judged for.”

— “Heal the wounds of the heart” by forgiving people who have wronged you and repairing the wrongs “we have caused others.”

— Be mindful of doing a good job by working “with enthusiasm, humility, competence and passion with a spirit that knows how to thank the Lord.”

— Heal oneself of “envy, lust, hatred and negative feelings that devour our inner peace and turn us into people who are destroyed and who destroy.”

— Pray to God for “the wisdom to bite your tongue in time, to not say insulting things that then leave a bitter taste in your mouth.”

— Take care of letting go of all “rancor that leads us to revenge and from laziness” that causes a sort of “euthanasia” of one’s very being.

— Stop pointing fingers, which only fuels pride and stop “complaining continuously, which leads us to desperation.”

Pope Francis said he understood why it was so easy to speak poorly of others, especially when it is done as a way “to defend yourself. I understand these situations. But it ends up very badly. In the end we are all destroyed, right? And this is not needed.”

He asked that everyone work hard to make sure Christmas “never be a holiday of commercial consumerism, of appearances or useless gifts or of unnecessary waste.”

The holy season of Christmas must be a time of joy in “welcoming the Lord in the creche and the heart.”

He asked that people look at others, especially those most in need, with God’s eyes — with “eyes of goodness and tenderness, the way God looks at us; he is waiting for us and he forgives us.”

Often people are afraid of humility and tenderness, the pope said, but it is humility that “we find our strength, our treasure.”

NEXT: For Arab Christians, getting to Bethlehem involves checks, imbalances