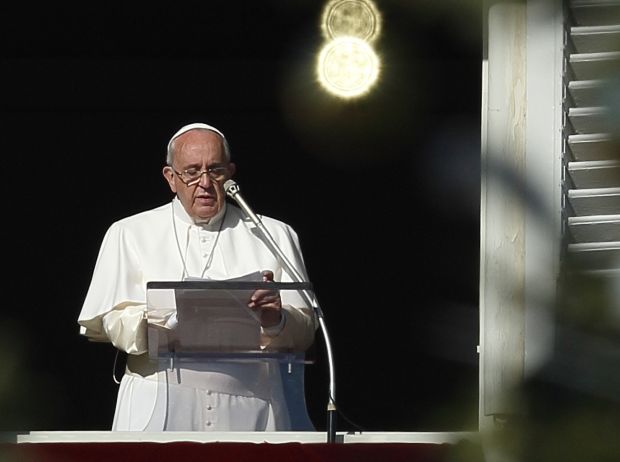 Decorations on the Christmas tree in St. Peter's Square glisten as Pope Francis leads the Angelus from the window of his studio overlooking the square at the Vatican Dec. 21. (CNS photo/Paul Haring)

VATICAN CITY (CNS) — Pope Francis deplored the “abuses and inhuman acts” of Islamic State militants, and called on all religious leaders to condemn them “unanimously and unambiguously.” He also said he hoped to travel to the Middle East to comfort persecuted Christians there.

The pope’s words appeared in a Christmas letter to Christians in the Middle East, released by the Vatican Dec. 23.

Pope Francis wrote that Christians in the region have experienced increasing “afflictions and tribulations” in recent months, “especially because of a newer and disturbing terrorist organization, of previously unimaginable dimensions, which has perpetrated all kinds of abuses and inhuman acts” — an apparent reference to the Islamic State, which has killed or displaced thousands of Christians and other minorities in Syria and Iraq.

The group has “particularly affected a number of you, who have been brutally driven out of your native lands, where Christians have been present since apostolic times,” the pope wrote.

Pope Francis said Muslims in the region should be encouraged to “present with discernment a more authentic image of Islam, as so many of them desire, reiterating that Islam is a religion of peace, one which is compatible with respect for human rights and favors peaceful coexistence on the part of all.”

In particular, the pope wrote, the “tragic situation faced by our Christian brothers and sisters in Iraq, as well as by the Yazidi and members of other religious and ethnic communities, demands that all religious leaders clearly speak out to condemn these crimes unanimously and unambiguously, and to denounce the practice of invoking religion in order to justify them.”

The pope acknowledged that, for many Christians in the Middle East this year, “Christmas hymns will also be accompanied by tears and sighs.” He noted the suffering of the “homeless and all refugees, the starving and those facing the prospect of a hard winter without adequate shelter.” He also mentioned “those who have been kidnapped, including several Orthodox bishops and priests of various rites.”

Reflecting on what he has often called the “ecumenism of blood,” Pope Francis wrote that the “sufferings which Christians endure contribute immensely to the cause of unity” between the region’s Orthodox and Eastern Catholics.

The pope urged Christians to act as “artisans of peace, reconciliation and development” in the Middle East, through dialogue with Jews and Muslims, and through continuing charitable and educational service to “anyone who asks, without discrimination.”

“You are not alone,” Pope Francis wrote to Middle East Christians, assuring them of his “personal closeness and solidarity, as well as that of the whole church.”

“I do hope to have the chance to come to you in person and to visit and to comfort you,” he wrote.

On his flight back from Turkey Nov. 30, the pope told reporters he was hoping to go to Iraq, but could not do so right away, since “that would create a rather serious problem of security for the authorities.”

PREVIOUS: For Arab Christians, getting to Bethlehem involves checks, imbalances

NEXT: As some Mideast countries empty of Christians, Lebanon’s numbers swell