Pope to ride in open vehicles during trip to Philippines 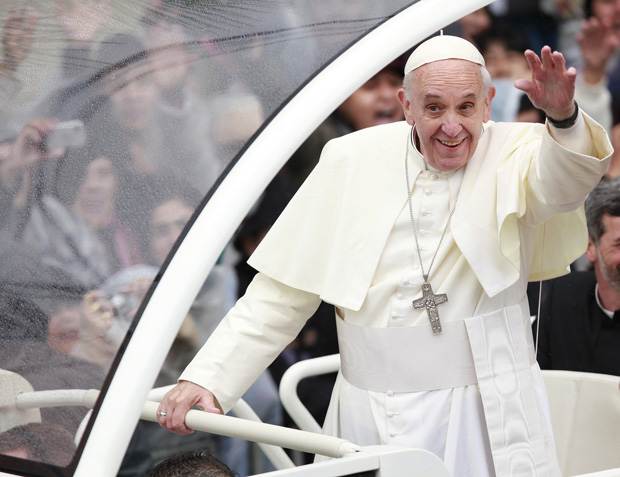 MANILA, Philippines (CNS) — Philippine church officials said the pope will be riding in open vehicles during his five-day visit in January.

For months, papal visit organizers had been asked about what kind of popemobile the pontiff would use during the Jan. 15-19 visit, especially after the notoriously violent group that calls itself the Islamic State said it planned to target Pope Francis during his travels.

Father Anton Pascual, who is involved in papal visit preparations, said the popemobile will not be bulletproof and will simply have a roof.

“The Holy Father wants to be accessible to the people,” he told Catholic News Service by phone. “(So) the people can see him and he can hear and be one with the people.”

Church officials said Pope Francis requested that there not be any barriers between himself and the masses.

“The pope will be vulnerable, like the church is vulnerable, and will be dependent upon the government and people for security and order,” Father Pascual said.

The pope will have two popemobiles: one in Manila and one in Tacloban, on Leyte Island.

Father Pascual said crowd control will be a “major concern” during the pope’s one-day visit to Tacloban and nearby Palo, the area that took the brunt of Typhoon Haiyan in 2013.

Pope Francis will celebrate Mass at the airport in Tacloban before going to Palo to have lunch with survivors of the typhoon and other calamities and bless the Pope Francis Center for the Poor.

“There is only one road passage from the airport to Palo,” said Father Pascual. “That’s why they have to perfect the place for the people and to make the road passable for the popemobile.”

In mid-December, the country’s military said President Benigno Aquino declared a longer-than-usual Christmas cease-fire with communist rebels. It will begin Dec. 18 and run through Jan. 19, the day the pope leaves the Philippines.

Apart from a security contingent made up of a special police task force and the military, the presidential security group will escort Pope Francis. Government officials had said earlier they were working on multiple contingency plans so that there would be “no surprises” during his visit.