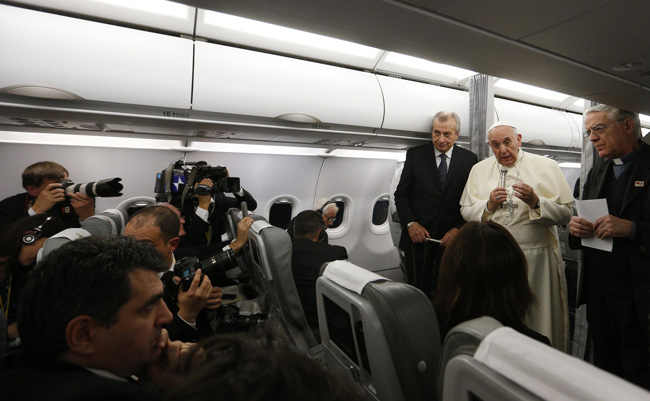 VATICAN CITY (CNS) — In a world where words and images are used to manipulate or to scapegoat people, Catholic media must use them with a care that shows how powerful words can be, Pope Francis said.

“Reawaken words! This is the first task of a communicator. Every word has a spark of fire and life inside it,” he told employees of the Italian Catholic bishops’ TV 2000.

Pope Francis showed up more than half an hour late for his Dec. 15 meeting with the employees, so he began his talk with a word of apology and an explanation that almost every meeting he had that morning went 10 minutes over the scheduled time, “so you paid the price.”

Too often communications media have been used for “propaganda, ideologies, political aims or for economic or technical control,” he said. The best way to avoid that is “to have the courage to speak frankly and freely.”

“If we are truly convinced of what we have to say, the words will come,” he said. “If, on the other hand, we are preoccupied with tactical aspects, our words will be artificial and uncommunicative, insipid.”

The media have become “faster and less reflective” as deadlines get tighter and people expect immediate access to the news, he said. Audiences have a right to be treated as people with both a brain and a heart, and to receive the information they need to make judgments about what is going on in the world.

PREVIOUS: Pope praises Our Lady of Guadalupe as great missionary of ‘our America’

NEXT: Pope Francis continues to take ‘the world by storm’