Catholic Charities Appeal launches with aim to give hope 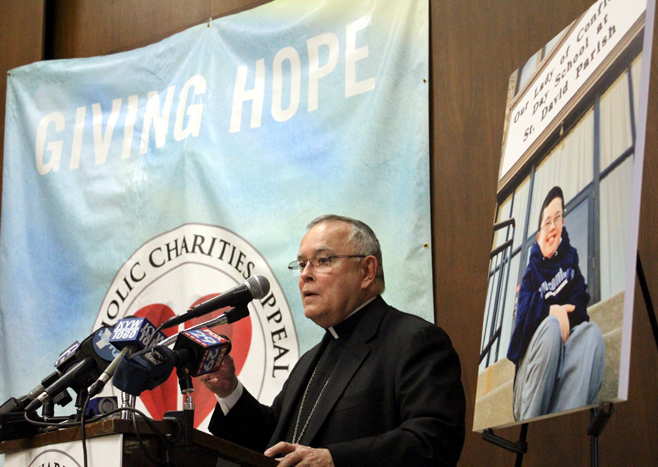 Archbishop Charles Chaput announces the start of the 2015 Catholic Charities Appeal in the Archdiocese of Philadelphia at a press conference Jan. 20 at the Archdiocesan Pastoral Center. (Photos by Sarah Webb) 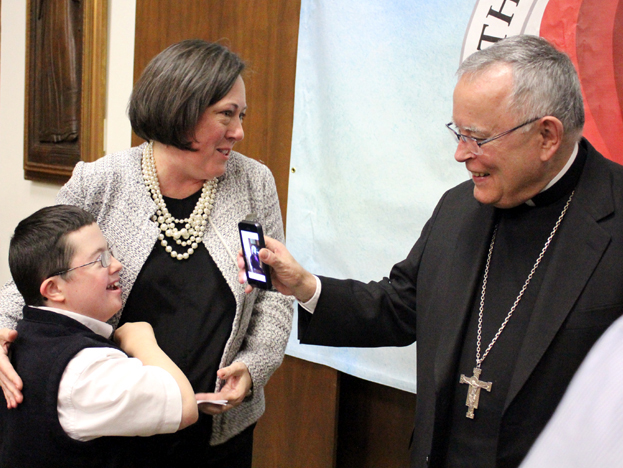 Mick Hanes, left, and his mother Courtney make Archbishop Chaput smile as he views a photo of Mick dressed up as his favorite archbishop. (Sarah Webb)

When Courtney and Christopher Hanes learned that their preborn son was diagnosed with Down syndrome and the challenges they could expect raising him, they reacted with confidence: “We have been blessed,” Courtney said.

Their daughter was already enrolled in Catholic school and they wanted a similar experience for their son Mick, so they signed him up as an infant at Our Lady of Confidence School.

The special education school of the Archdiocese of Philadelphia is a recipient of funding from the annual Catholic Charities Appeal, which launched with a press conference Jan. 20 led by Archbishop Charles Chaput at the Archdiocesan Pastoral Center in Philadelphia.

Courtney and Mick Hanes gave witness to the work of Our Lady of Confidence in educating children with developmental and cognitive disabilities.

Mick, now 11, can read a menu and choose chicken fingers and fries for himself, and don’t tell him there’s no McDonald’s for miles on the highway because he can read the signs just fine.

Courtney said watching the joy of children who are “given the opportunity to grow and thrive in a safe setting” at Our Lady of Confidence’s Willow Grove location for elementary school-age kids is a cure for anyone having a bad day.

But the school does not operate on families’ tuition money alone. “We totally rely on the support of Catholic Charities to keep the school going,” she said.

Peg Devaney, principal of St. Katherine Day School in Wynnewood – also a special education Catholic that school receives funding from the Catholic Charities Appeal – said the funds make up just under 50 percent of the school’s funding. The remainder comes from tuition and fees, but parents can’t be expected to fully fund special education schools. 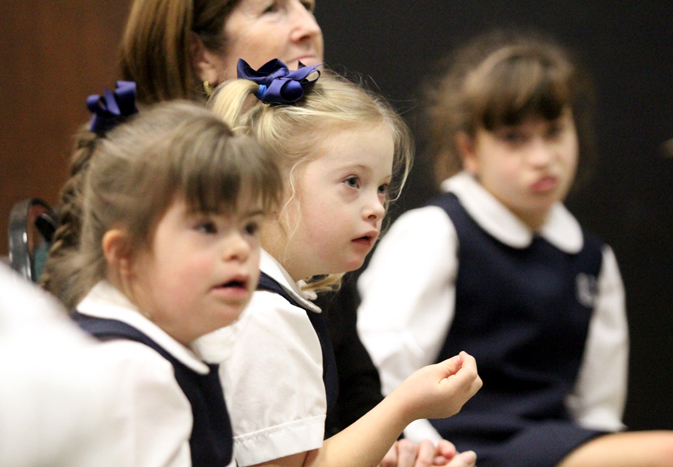 Evie, Maggie and Olivia, all students of Our Lady of Confidence School, listen carefully during the press conference. (Sarah Webb)

“There are enough expenses for a special needs child” that parents have to pay, Devaney said. “We really need the funding from the Catholic Charities Appeal.”

Archbishop Chaput pointed out in his remarks that the more than 200,000 people served by agencies of archdiocesan Catholic Social Services that receive Catholic Charities funding come from all walks of life, Catholic or not.

He underscored the theme of this year’s appeal, “Giving Hope 2015,” as he explained hope “is an act of faith in the future because we know God will take care of us.”

The people receiving social services from 2,000 church employees in more than 100 programs and locations in the five-county archdiocese have hope because “people have cared for them in the past and will in the future,” he said.

“You don’t have to be part of our church,” Archbishop Chaput said. “If you have a need we want to reach out and help as best we can.” 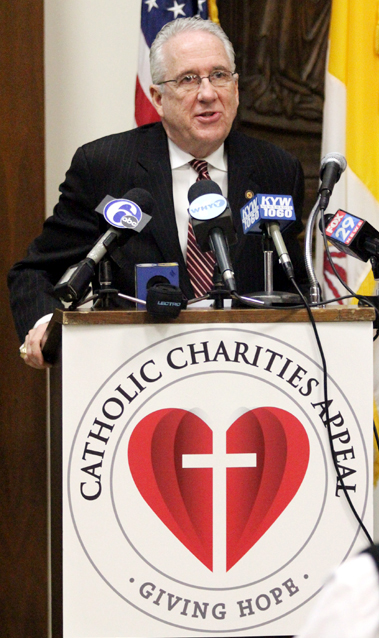 Joseph Sweeney, who as head of archdiocesan Catholic Human Services which includes Catholic Social Services, said the church’s social outreach “brings the full breadth of expertise in every area.”

In its 2013 annual report Catholic Social Services outlined its $116 million budget that showed the archdiocesan subsidy, of which the Catholic Charities Appeal was included, made up almost 20 percent of CSS revenues.

Because program costs inevitably rise each year and because the appeal’s fundraising goals have remained at $10 million for the past several years, Sweeney said CSS’ endowment reserves must be judiciously tapped to balance the funding gap and avoid scaling back programs and services.

Traditionally the Catholic Charities Appeal was carried out primarily in parishes and that is still the case this year. But with the decline in participation in parish life – the recent October count reported 21 percent of registered parishioners on average in the archdiocese attend Mass on a given Sunday – how will the appeal reach those Catholics who aren’t going to church regularly?

James Quinlan, a member of the appeal’s board of directors, said the aim will be to increase the number of gifts by reaching people in the parishes’ pew and outside them, particularly through digital social media.

“We need to reach a wider group,” he said, so a video of the appeal will combine with a social media app that allows viewers to donate within the video itself. The appeal also plans special events at Philadelphia Phillies and 76ers games this year.

Quinlan was pleased that the average gift amount for the appeal last year was $150, and he hopes to increase the number of gifts this year in order to exceed the $10 million goal.

The appeal’s goal has remained at $10 million each year since 2012; it was $8 million in 2011. The generosity of Catholics in the archdiocese has caused the appeal to top its goals each of those years. 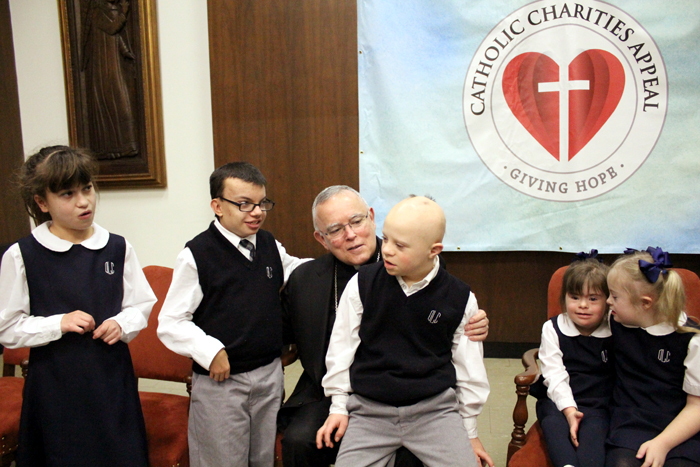 NEXT: 71 buses ready to head for Washington and March for Life