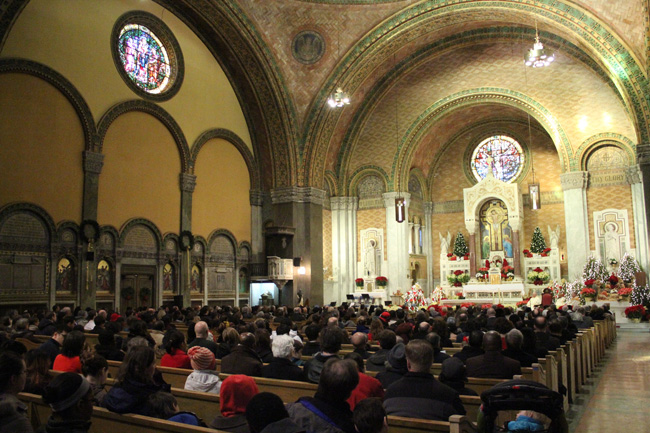 When Archbishop Charles Chaput visited St. Francis de Sales Church in Philadelphia on Jan. 11 to celebrate Mass in honor of the parish’s 125th anniversary, he was looking out at a full house — approximately 1,000 worshipers.

This represented quite a comeback for a parish that had undergone a half-century or so of quiet decline. Even more impressive, according to St. Francis’ pastor, Father John Hand, was a recent school program in the church where a couple of hundred folding chairs had to be added.

The parish was formed in 1890 from territory taken from St. James Parish. Father Joseph O’Neill, the senior curate at St. James, was named the pastor. Early Masses were in a hall at 49th and Woodland Avenue but this was quickly superseded by a substantial chapel at 47th and Springfield that could be used partially for a school.

The school opened in 1904 under the direction of the Immaculate Heart Sisters who remain to this day.

“It leaks,” was the complaint of pastors for many decades. Finally in a project begun under Father Louis Bier and completed under Father Hand, the entire dome has been sealed and the surface painted to mimic the underlying tile design, which seems to have solved the problem.

Not long after its foundation, St. Francis de Sales became one of the most prominent parishes in the city as did its near neighbor, Most Blessed Sacrament. At one point MBS boasted the largest parochial school in the country. 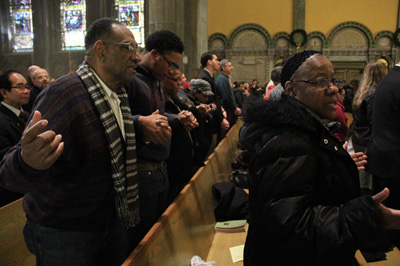 Over time most of the thousands of Irish Catholic families that were the life blood of the two parishes developed an urge to become suburbanites. MBS was absorbed by St. Francis in 2008.

More recently there has been a modest resurgence in what has become a multinational parish, reflecting the makeup of the nearby and ever-expanding University City neighborhood in West Philadelphia.

“My view is the parish can stand on its own,” said Father Hand, who  accompanied by Deacon John Gallagher and others has been doing a house-to-house visitation every Monday, September through June, weather permitting for the past three and a half years.

So far, he estimates, they have visited 8,000 homes in the old MBS area but there are still many more to go.

Also, during the non-heating months, the main doors of St. Francis Church are left wide open from 6 a.m. until 6 p.m. as a welcome to all comers.

Something is working, because in the past year Mass attendance has increased 10 percent, Father Hand said.

Renovations that were deferred for years are now ongoing; recently the terrazzo floors have been refurbished and the dome’s windows, unused for 50 years, can now be opened for ventilation.

The interior scaffolding put in place for renovations has been removed but the exterior scaffolding remains, especially on the entrance façade. Father Hand knows that will have to be torn down and rebuilt, because it has badly shifted.

“We are still looking at about $3 million in renovations,” the pastor said.

Paul and Paula Harvey were newcomers from Boston 39 years ago when they decided to buy a house in St. Francis Parish. The real estate agent thought they were crazy and advised against it. White families were moving away in droves, and the area was becoming heavily African American.

There was nothing wrong with that in Paul and Paula’s minds so they stayed around and raised eight kids in the parish. Paul is probably the only white past grand knight for the Knights of Peter Claver, the fraternal organization for Black Catholics, in the city.

“I find it a very good place to live,” he said. “Now it is changing, getting younger with people moving in all the time.”

Paul cites the diversity of the parish with both Spanish and Vietnamese Masses, the historically great choir backed but a world-class organ that is one of the finest in the city, and new programs starting up.

“At first the merger with MBS was a shock,” he said. “But we look on it as if we merged with another parish we have merged with the Most Blessed Sacrament itself.”

Deacon John Ellis recently has accepted the assignment to St. Francis de Sales after years of service with St. Barnabas Parish and he too senses the vitality.

“We are starting a lot of programs here,” he said, “for example Sodality of the Blessed Virgin and devotions to the Infant of Prague.”

‘It’s a beautiful parish, wonderful, fabulous,” said a parishioner who entered the faith through the RCIA program when the late Msgr. Thomas Hilferty was pastor, and wishes to be anonymous.

“All of us were deeply touched that the archbishop celebrated Mass for us and his homily was inspiring. The parish has changed but it is still tremendous — the sisters in the school, the choir, the great sense of community.”

PREVIOUS: Who is a credit to his Catholic school?

NEXT: Catholic Charities Appeal launches with aim to give hope