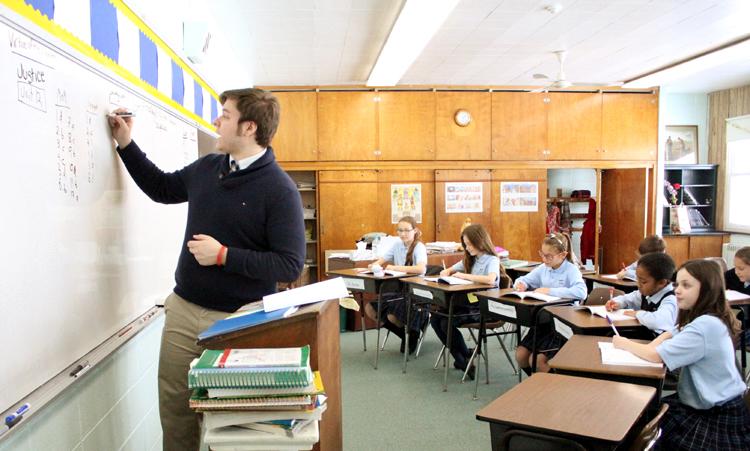 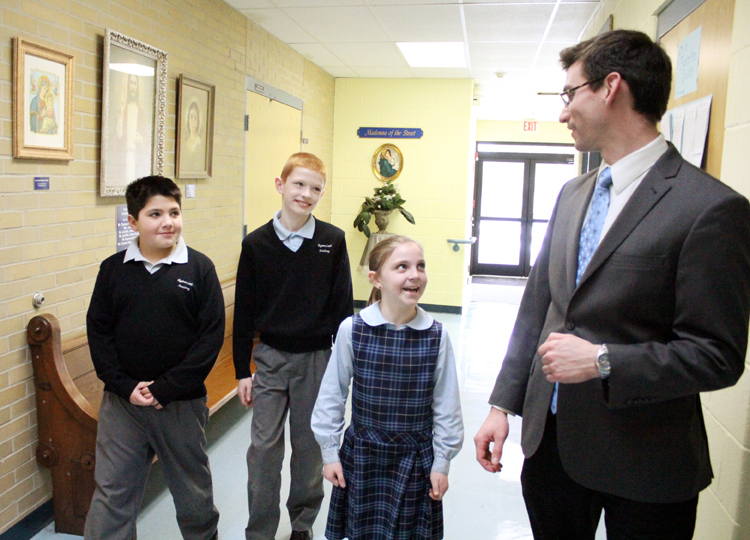 As one student in first-year Latin class wrote in an essay, “Regina Coeli optima academia in mundo;” in English that means, “Regina Coeli is the best school in the world.”

If you were to guess from the names of the four Regina Academies — Regina Angelorum Academy in Ardmore, Regina Coeli Academy in Abington, Regina Luminis Academy in Downingtown and now Regina Academy at St. John the Baptist in Ottsville — that they are very big on Latin, you would be partially right.

The truth is the Reginas, which usually cover grades K-8, are very big on Catholic classical education, and more specifically based on what is known as the Trivium including grammar, logic and rhetoric.

Grammar, which is stressed in the lower grades, isn’t just the fundamentals of sentence structure. It includes memorization of basic facts, religion, history and vocabulary, on the belief you need to know the language of the subject before you can understand it and speak about it.

This explains why the Regina Academies still teach religion from the old Baltimore Catechism in the lower grades because it is based on building blocks through memorization. Students in the upper grades use the Catechism of the Catholic Church (promulgated in 1992), which does not stress memorization.

Logic involves learning how to think critically on a subject and rhetoric is the art of communicating — speaking persuasively and with self-confidence. 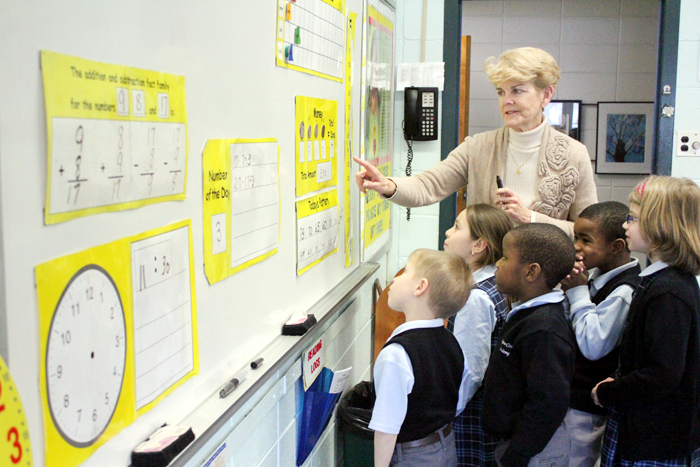 The Regina Academies, starting with Regina Coeli in 2003, were founded by the late Paul Henkels and his wife Barbara Henkels, who philanthropically supported all Catholic schools. They also wanted to establish schools that returned to the classical mode, which in their opinion worked best.

They wanted these schools to be emphatically Catholic, and for this reason all faculty members must take the oath of loyalty to the Magisterium.

“They also have Mass every week,” Barbara Henkels said. “I think the schools are going beautifully. We have wonderful headmasters and wonderful faculties.”

The four schools combined have a total enrollment of about 400 or on average 100 students each. For parochial schools the low enrollment number would be considered impractical from an economic standpoint. But the Regina Academies’ comparatively higher tuition makes them sustainable and tuition assistance in many cases makes the schools affordable for parents.

Christopher Keefe, a former teacher at Regina Angelorum who is now headmaster at Regina Coeli, estimates average class size at the schools is 10 pupils per class, and he would not like to see it rise above 13 or 14 because the smaller class size gives the opportunity for more individual attention to the students.

At Regina Coeli the students actually attend two Masses weekly, once in school and the other at adjacent Our Lady Help of Christians Church, Keefe said.

Although the emphasis is on classical studies with some Latin in all grades and an introduction to Greek in the upper grades, there is also stress on writing and the analysis of it as well as logic and forensics.

The reading lists students might select from in the beginning years is not much different than in most elementary schools, but they get progressively more challenging. By grade seven and eight students are reading such classics as plays from Shakespeare, “Great Expectations,” “The Adventures of Huckleberry Finn,” “The Adventures of Tom Sawyer,” “The Scarlet Pimpernel,” “The Screwtape Letters,” “The Rule of St. Benedict” and “Story of a Soul: The Autobiography of St. Therese of Lisieux.”

Despite its demanding curriculum and emphasis on the classical curriculum rather than the Common Core State Standards, most students stay once they come and most important, they are accepted by the high school of their choice afterward, which shows “we are doing something right,” Keefe said.

Mike and Agnes Ferguson have really bought into the Regina schools. Four of their 10 children are graduates and five are currently enrolled at Regina Coeli.

“My husband and I chose Regina Coeli Academy for our children first and foremost for the Catholic formation,” Agnes Ferguson said. “At Regina Coeli Academy the Catholic faith is not just taught, it is lived by the teachers, students and families. Our children are surrounded by examples of Christian virtue at school and at the homes of their friends.”

Also, she noted, the smaller class sizes allow the teachers to know the students better and the classical formation was appealing because of its goal to work with children in their developmental stages.

“Families like ours who choose Catholic schools in general and Regina Coeli Academy in particular,” Agnes Ferguson said, “want and need schools that support the goal of raising holy children who positively impact the Church and the world.”

Eighth-grader Phil Baldassari would second that. “I loved RCA because of the small, but immensely close-knit ‘Regina Coeli family’ which brings about individualized attention and a strong education,” he said. “I love the amazing and incomparable faith formation that you can find at no other school. RCA brings strong faith, morals and education to its students which is why it’s a school like no other.” 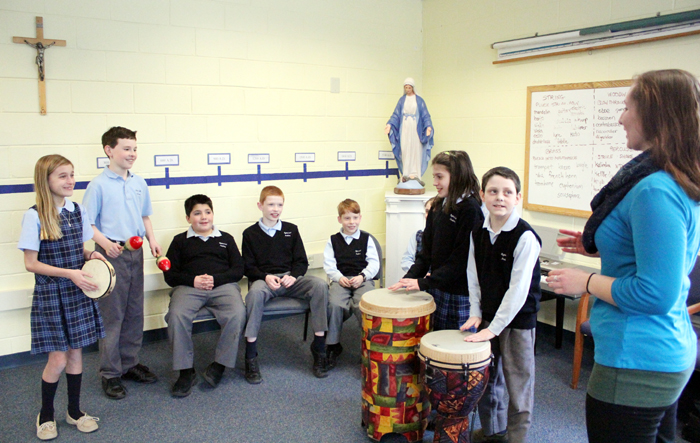 NEXT: Hallahan prepares to declare it’s no place for hate