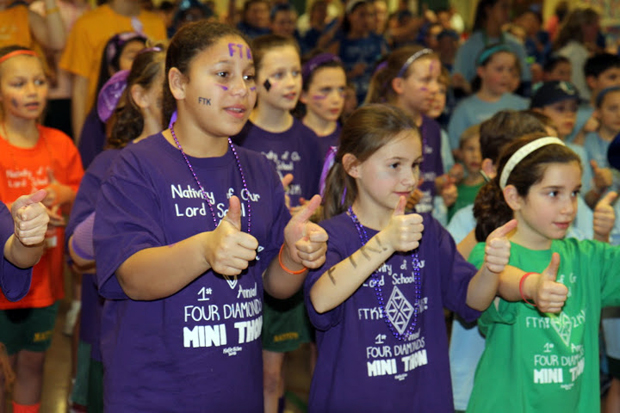 Students of Nativity of Our Lord School in Warminster have fun Jan. 29 while raising money for awareness of pediatric cancer. 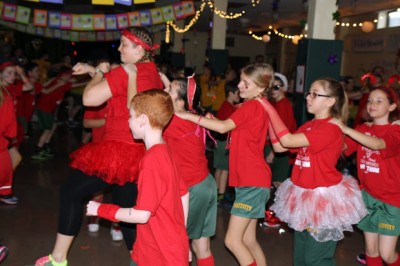 Conga lines are even more fun when more than 500 kids dance along.

When students at Nativity of Our Lord School in Warminster assembled in November to hear about a service project for their Catholic Schools Week in January, they could not have known how successful it would turn out to be.

They planned a Mini-THON fundraiser, akin to a dance marathon, with a conservative goal set at $8,000 in support of Penn State University’s THON philanthropy program.

When the music and dancing stopped at the end of the day on Thursday, Jan. 29, the students had blown away their goal and raised more than $38,000.

Most of Nativity’s students — 504 of the total school enrollment of 509 – participated in the Mini-THON. They had paid a fee to take part, secured supporting donors and got ready to stay on their feet for six straight hours to remember the struggles of children living with cancer.

The event kicked off at 9 a.m. in the Nativity church hall with an introduction from the student chairperson and organizer, eighth grader Grace Borell.

Afterward Ryan Patrick, a 2006 Nativity school alumnus, Penn State graduate and last year’s Penn State THON chairperson encouraged the students to dance and have fun but remember the cause.

Nativity Parish’s pastor, Father Angelo Citino, spoke of the corporal works of mercy and the students’ role in performing those works in this project, followed by an opening prayer.

The first hour of the Mini-THON was dedicated to the memory of Victoria Hillman, a Nativity student who died after a valiant fight with pediatric cancer while in fifth grade. Her mother, Connie Hillman of Warminster, gave a beautiful tribute to her daughter and her brave fight, describing how important Victoria’s experiences at Nativity were to her happiness. 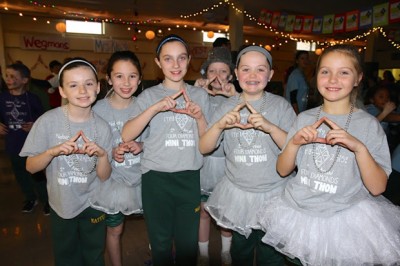 Nativity students show their support for the cause.

Throughout the day students danced, played games, performed physical fitness activities, received face painting and tattoos and created a massive handprint wall in commemoration of the day’s purpose and mission.

Lunch and snacks for the entire student body, faculty and volunteers was provided by multiple area restaurants and businesses.

Subsequent tributes were given throughout the day to other children of the parish or connected to someone in school that has battled pediatric cancer, including a young girl and her mother, currently in treatment for cancer at Children’s Hospital of Philadelphia.

At day’s end when Borell and her student committee announced they had raised $38,578.52, screams went up, tears flowed and loud chanting of “FTK” (For The Kids) broke out as everyone realized what they had done to help children and families like their own.

The students proudly display the total funds they raised in the Mini-Thon Jan. 29.

NEXT: Old is new: Regina Academies grow by teaching the classics in small classes