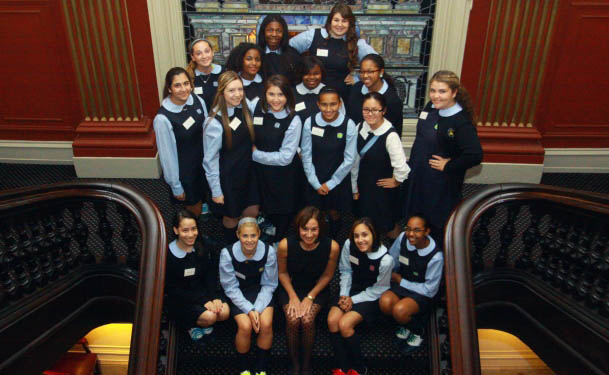 John W. Hallahan Catholic Girls’ High School, Philadelphia’s oldest archdiocesan high school for girls, is by no means a place that is seething with animosities. But of course no one is perfect, and a little introspection on the issue of relationships never hurts.

That’s why this year Hallahan adopted as its Catholic Schools Week theme, “No Place for Hate.”

It’s actually a program sponsored nationally by the Anti-Defamation League (ADL) with the goals of:

It was supposed to culminate on Jan. 29 as “No Place to Hate Day” with a full round of activities involving the entire school community.

Unfortunately the snow alert put a crimp in everything. Even though the forecasters were dead wrong (we won’t hate them for that) as far as Philly snow fall was concerned, a day and a half was lost so now “No Place for Hate Day” will happen on Thursday, Feb. 5.

But it is really not a one-day event anyway. It started with the school’s observation of Martin Luther King Day, with emphasis on the Golden Rule and Dr. King’s “I Have a Dream Speech,” according to Kristen Sheridan, Hallahan’s assistant principal. There followed a day when uplifting music was played between classes.

Last week during Catholic Schools Week there were small colored baskets on top of each locker and the students were encouraged to ponder the theme and write their thoughts on No Place for Hate.

The students will break out into small group discussions about prejudice or hate. With markers they will decorate T-shirts and there will be a large basket where everyone can throw in the notes they have made up over the week, symbolically throwing away their hatred.

In the end, a representative or representatives of the ADL will present a citation formally declaring John W. Hallahan is a No Place for Hate School.