Across U.S., people prayed and rallied to mark Roe’s anniversary 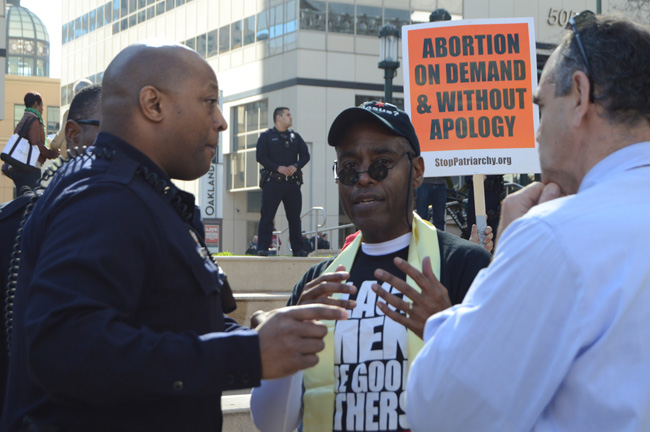 The Rev. Clenard Childress, founder of BlackGenocide.org, center, talks with a police officer Jan. 23 during a rally for life in Oakland, Calif., as a counter-demonstrator holds a sign in the background. Concerned about the safety of participants as protesters tried to disrupt the event, rally organizers canceled a march through downtown Oakland that was to have followed. (CNS photo/Michele Jurich, The Catholic Voice)

WASHINGTON (CNS) — From Alaska to Hawaii and dozens of locations in between, pro-life advocates participated in marches, rallies and prayer services marking the Jan. 22 anniversary of the U.S. Supreme Court’s Roe v. Wade decision that legalized abortion virtually on demand.

On Jan. 24, people gathered for an interdenominational prayer service in Anchorage, Alaska, and nearly 3,000 miles away people took part in a March for Life rally at Hawaii’s state capitol in Honolulu that featured musicians and keynote speakers.

In Santa Fe, New Mexico, the state’s three bishops celebrated a noon Mass Jan. 21 at the Cathedral Basilica of St. Francis of Assisi and then led participants in a procession to the state capitol for a rally and the opportunity to visit state legislators.

Participants were asked to bring baby items such as diapers, blankets, bottles or socks, and socks and toiletries for the elderly to be collected at the Mass and distributed to organizations that provide support to expectant mothers and the elderly.

Thousands of people took part in a Jan. 18 march, which concluded with a rally at the state capitol in Little Rock, Arkansas. The keynote speaker, newly elected Republican Gov. Asa Hutchinson, told the crowd that 28 years ago he attended his first pro-life rally at the same spot.

“I spoke on the importance of protecting innocent life. I was present as a newcomer to politics. I was a novice, so I did not know that a serious candidate was not supposed to attend such a controversial-type rally,” Hutchinson said.

But pointing out the number of pro-life leaders in Arkansas, the governor said: “Times have changed, not just across Arkansas but across this nation and they have changed because of your efforts, your consistent efforts every year in being here and holding up the flag and saying you’re pro-life and saying Roe v. Wade needs to be reversed. The credit goes to you.”

“To have the governor at the capitol marching with us is just a huge improvement over the tone at the state capitol over the last eight years. We want a governor who will stand up for life,” Mimms said.

At the Little Rock rally, among signs that read “America God is watching,” “Stop abortion now” and “Abortion stops a beating heart,” Chris Teague, a member of St. Joseph Church in Tontitown, Arkansas, held up a stick with a small statue of Our Lady of Guadalupe at the top.

“We’re praying for her to intercede and stop the massacre happening in the United States and around the world,” said Teague, a father of four.

Little Rock Bishop Anthony B. Taylor attended the march and celebrated a Mass for Life prior to the march at Little Rock’s Statehouse Convention Center.

In Texas, Bishop Kevin J. Farrell of Dallas, Bishop Michael F. Olson of Fort Worth and Auxiliary Bishop J. Douglas Deshotel of Dallas concelebrated the annual Roe memorial Mass at the convention center in downtown Dallas Jan. 17 for a congregation of thousands.

Before Mass, nearly 400 people prayed the rosary outside the Southwestern and Planned Parenthood abortion facilities. About 12,000 people joined in the North Texas March for Life through downtown Dallas following the Mass.

Leading the marchers were the Bikers for Life and Knights on Bikes. Bishop Farrell accepted the invitation to ride on one of the motorcycles for a couple of blocks.

While Texas has been a leading state in seeing passage of some restrictions on abortion, Bishop Farrell said in a statement that “it is Christ’s incarnation and victory over the cross that most inspire and compel us on this road to defend the sanctity of his most precious give to us — life, both on earth and eternal.”

In Oakland, California, a Jan. 23 pro-life rally in front of Oakland’s City Hall was interrupted by protesters carrying signs of support for legalized abortion who walked up to the steps and stood beside the rally’s speakers.

The Rev. Clenard Childress, founder of BlackGenocide.org, and the rally’s last scheduled speaker, never stopped talking. “The baby has rights,” he chanted for a while. “Black lives matter.” “Babies lives matter.”

No one was injured or arrested. The Rev. Walter Hoye, founder of Issues4Life and the rally’s coordinator, said that out of concern for the safety of children attending the rally with their parents, he canceled the walk through the streets of downtown Oakland that usually follows the rally.

The event ended with a prayer, including prayers for the police and the protesters, and a rendition of “We Shall Overcome.”

Bishop Ronald W. Gainer of Harrisburg, Pennsylvania, celebrated a Sanctity of Life Mass Jan. 20 at St. Anthony of Padua Church in Lancaster. The bishop also prayed and marched with several busloads of parishioners and students from the diocese who attended the March for Life in Washington.

Two parishes in the Harrisburg Diocese held events for those unable to attend the Washington march. St. Elizabeth Ann Seton Parish in Mechanicsburg provided meals, a film and viewing of the march on television, as well as opportunities for prayer. St Paul the Apostle Church in Lebanon also held a solidarity event that day with a demonstration in town followed by a gathering at the parish.

The end of these events does not mean pro-life activists will just wait until next year’s rallies.Mimms, a parishioner at St. Theresa Parish in Little Rock, urged Catholics to continue to pray for an end to abortions and to contact their political leaders about the issue.

“Please pray and pray every day for not only the conversion of those who support legal abortion … but for those that are on the frontlines in crisis pregnancy centers, for those trying to pass laws to protect the unborn and their mothers and the (political) candidates standing strong for life,” she said.

“Just to do something; we all should be doing something,” she added.

Contributing to this story was Aprille Hanson in Little Rock and Al Pacciorini in Oakland.