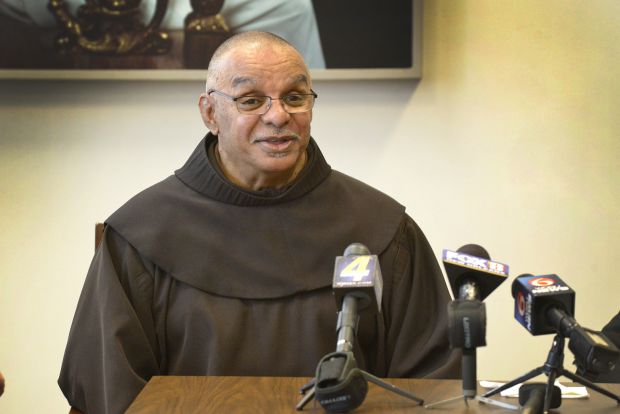 UPDATED – WASHINGTON (CNS) — Pope Francis has named Franciscan Father Fernand “Ferd” Cheri III, a New Orleans native who currently is director of campus ministry at Quincy University in Illinois as an auxiliary bishop of the Archdiocese of New Orleans.

The appointment was announced Jan. 12 in Washington by Archbishop Carlo Maria Vigano, apostolic nuncio to the United States.

Bishop-designate Cheri, who turns 63 Jan. 28, has a background that includes extensive roles in black Catholic liturgy, music and spirituality, in addition to having served on the Franciscans’ provincial council and as their director of friar life.

He also is a board member of the National Black Catholic Congress and has been involved in activities including the NBCC gatherings, the U.S. bishops’ subcommittee on Black Catholic worship and the National Joint Conference of Black Religious Planning Committee.

He originally was ordained as a priest for the Archdiocese of New Orleans May 20, 1978. He studied at Notre Dame University and at the Institute for Black Catholic Ministry at Xavier University, both in New Orleans.

During a news conference in New Orleans after his appointment was announced, Bishop-designate Cheri said he never truly left his hometown and was surprised but thrilled that Pope Francis had appointed him as auxiliary bishop in the city where most of his family still lives. He said he is pleased that he will be working alongside Archbishop Gregory V. Aymond.

“I’d like to say first of all thank you to Pope Francis for appointing me to this position,” he said.

“It was a total surprise, but it was a wonderful moment to just be told that I was appointed auxiliary bishop,” added Bishop-designate Cheri. “I also want to thank Greg for accepting me in this position as well. I look forward to just working with the people of New Orleans again. I never left New Orleans. It’s always a part of me. Wherever I go, I bring New Orleans. It’s going to be great to be back in the city.”

Bishop-designate Cheri will be ordained bishop at a Mass March 23 at 2 p.m. at St. Louis Cathedral.

“He is very gifted in music and preaching and liturgy,” Archbishop Aymond said. “This is also a very significant moment, I think, for us as New Orleans (Catholics) — another hometown boy joining us again. But also a great gift from the African-American community to the church and to the archdiocese.”

As a diocesan priest for four years at four parishes in New Orleans and Marrero, Louisiana, Bishop-designate Cheri was involved in ministry in the black Catholic community. It was at that time that he began discernment in becoming a Franciscan.

“A lot of my support at that time was from the religious communities that were primarily staffing parishes in the black community of New Orleans,” he said.

“I got used to that. I said, ‘Well, if I’m getting support from them, I might as well be a religious.’ Being a diocesan priest for me was very lonely. I grew up with a family and bouncing things off of other people. I needed that support. I received a lot of that from the religious communities of New Orleans.”

He entered the novitiate for the Order of Friars Minor, in the Sacred Heart Province, based in St. Louis in 1992 and made his solemn profession as a Franciscan two years later. Since then he has served as a chaplain at Hales Franciscan High School in Chicago and as pastor of St. Vincent de Paul Church in Nashville, Tennessee.

He also served as a choir director and guidance counselor at Althoff Catholic High in Belleville, Ill., while part of a contingent that launched St. Benedict the Black Friary in East St. Louis, an outreach to the poor, African-American community.

Prior to beginning his position at Quincy University in 2011, he was director of campus ministry at Xavier University. In addition to his post at Quincy, he is vicar of Holy Cross Friary, located on the campus.

Prior to beginning his position at Quincy University in 2011, he was director of campus ministry at Xavier University in New Orleans. In addition to his post at Quincy, he is vicar of Holy Cross Friary, located on the campus.

According to his biography on the NBCC website, he created youth gospel choirs in several places, began the Black Saints Celebrations for the Archdiocese of New Orleans and is convener and facilitator of Go Down Moses Retreats for African American Catholic Young Men.

The New Orleans Archdiocese has had no auxiliary bishops since Bishop Shelton J. Fabre was named in 2013 to become bishop of Houma-Thibodaux. Auxiliary Bishop Dominic Carmon retired in 2006.

Contributing to this story was Peter Finney Jr. in New Orleans.