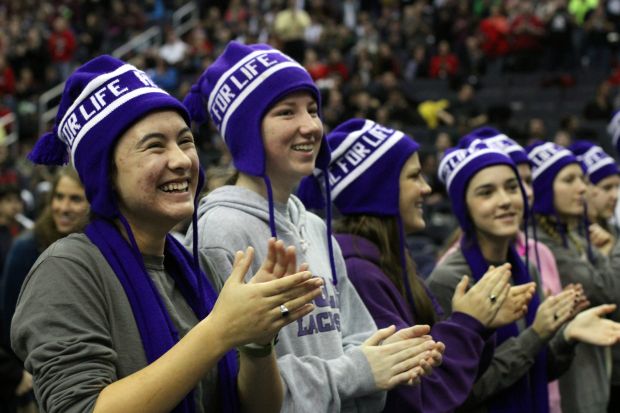 Junior Devon Lyons, left, and fellow students from the Academy of the Holy Cross in Kensington, Md., clap during a pro-life youth rally at the Verizon Center in Washington Jan. 22. Thousands of young people gathered at the arena to rally and attend Mass before taking part in the annual March for Life. (CNS photo/Gregory A. Shemitz)

WASHINGTON (CNS) — At this year’s March for Life Jan. 22, the things to notice about the crowd in attendance were its youth, its growth and the sense that these young people are bringing about a cultural renewal.

Groups from all over the United States came in droves and the majority of people in those groups were young, energetic, bright-eyed and hopeful.

At a coffee and doughnuts breakfast at St. Peter’s Church on Capitol Hill, offered in the parish hall below and filled with March for Life pilgrims, one group that stood out was the one from St. Agnes Church in Hillsboro, Illinois.

According to the group’s leaders, not only had the Diocese of Springfield, Illinois, had to add an extra bus this year to transport its delegation, the delegation itself was heavily composed of the parish’s youth.

“The kids are aware of the truth of the life issue,” said Angie Mizera, a group leader. “The lies created by the opposition have been proven false over and over again, and thanks to the technology and transparency resulting from it, the truth has been made apparent to this generation.”

Accompanied by banners, balloons and drums, Crusaders for Life brought in youth and adults from all over the Detroit metro area. One of the marchers with them, Joe Jaczkowski of SS. Cyril and Methodius Parish in Sterling Heights, Mich., stated, “I’ve been coming for the past eight years and it’s been amazing to see how its grown. … For every one more adult you see come, you see five more teenagers.”

Before the march, Ashley Accardo, a 16-year-old from the Archdiocese of New Orleans, told Catholic News Service that pro-life youth are important because “we are the nation’s future … and since we don’t have as many in our generation as we should, we must defend those who cannot defend themselves.” She added that the pro-life movement “isn’t about hate or control, but about creating a dialogue of compassion and understanding.”

When asked about his perspective on the youth of the movement, Archbishop Joseph E. Kurtz of Louisville, Kentucky, the president of the U.S. bishops’ conference, told CNS: “I have come to the march for years, regardless of who came or what it was like, but now I come not only to march, but also to see so many young people doing the same.”

In a statement from the congressional delegation issued for the Roe anniversary, U.S. Rep. Chris Smith, R-New Jersey, said that “Tom Brokaw wrote about the greatest generation, and the WWII generation was indeed great, but yours will be the pro-life generation.”

In an interview with CNS, former U.S. senator and presidential candidate Rick Santorum said that “the thing to notice about this march is that it’s young, it’s energetic and it is disproportionately women, which is not something the media would ever portray (about) the pro-life movement, but it is.

“And that’s encouraging,” he said. “It’s really encouraging to see this kind of dedication every year. I think it’s growing and the energy is definitely palpable.”

PREVIOUS: New alliance aims to create culture of life across all walks of life

NEXT: Father Richard McBrien, prolific theologian and essayist, dies at 78