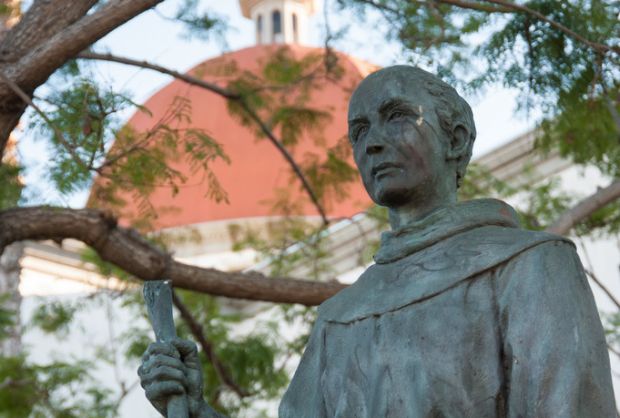 WASHINGTON (CNS) — Surprising even the people who have been promoting the sainthood cause of Blessed Junipero Serra, Pope Francis announced Jan. 15 that in September, he hopes to canonize the 18th-century Spanish Franciscan who founded a string of missions across Mexico and California.

Blessed Serra is credited with directly founding nine missions in California, one in Baja California in Mexico and with reinvigorating established missions in Mexico. Friars under his tutelage founded many others across California, in territory that was then part of New Spain.

The vice postulator for Blessed Serra’s sainthood cause, Franciscan Father John Vaughn, told Catholic News Service he was taken completely by surprise by the pope’s announcement. Even among the friars at Mission Santa Barbara, where he lives, “I was the last to know,” he said.

The announcement came when Pope Francis, aboard a flight from Sri Lanka to the Philippines, explained to reporters his decision to canonize St. Joseph Vaz, a 17th- and 18th-century missionary to Sri Lanka, bypassing the usual process, including verification of a second miracle attributed to the saint’s intercession. Pope Francis said St. Joseph was among great evangelists whom he planned to canonize without such preliminaries, in an effort to celebrate the practice of evangelization.

Father Vaughn said he had heard that Pope Francis considered Blessed Serra to have already met the sainthood criteria because of the way he brought the Catholic faith to California and the native populations. But that the pope was ready to move on canonizing the friar came as a total surprise, he said.

The announcement is “a great honor for the province,” Father Vaughn said. “We’ve always looked to Serra as the ideal for how to preach the Gospel, as he said ‘always go forward, never back.'”

Blessed Serra was born in the village of Petra on the Spanish island Mallorca Nov. 24, 1713. After entering the Franciscans, he obtained a doctorate in sacred theology at the National University of Blessed Ramon Lull and developed a career as an academic and acclaimed preacher in Spain. At the age of 36, he volunteered to go to the New World, to Mexico. 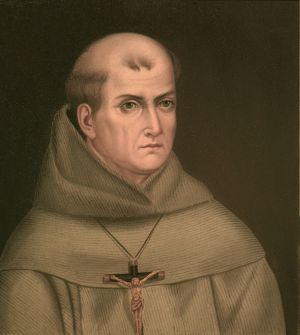 As noted in a biography of Blessed Serra on the website of the California-based Santa Barbara Province of the Franciscans, the friar first was assigned to the remote Sierra Gorda region, in what is now the state of Queretaro, where he worked among the Pame Indians, some of whom had already been converted to Catholicism. He then spent another decade crisscrossing central Mexico, preaching.

In 1758, he was appointed to head up a group of Spanish Franciscans sent to evangelize and colonize “Baja” and “Alta” California. He personally established nine missions in what is now the state of California, beginning with Mission San Diego de Alcala in present-day San Diego. He supervised the Franciscans who founded 12 more California missions.

Steven Hackel, a history professor at University of California at Riverside who has written a biography, “Junipero Serra: California’s Founding Father,” told CNS he thinks of Blessed Serra as one of the little-heralded “founding fathers” of the United States. Though he was a contemporary of George Washington and Thomas Jefferson, the priest and other missionaries who settled areas beyond the East Coast were crucial to the development of the nation as well.

“Every region had its missionaries who were founding fathers of another sort,” Hackel said.

Although California fourth-graders study Blessed Serra’s accomplishments in social studies classes, Hackel said he and the other missionary founding fathers are often ignored in history textbooks. He said he hopes new attention to Blessed Serra will change that.

As to where the canonization might take place, Pope Francis gave no indication.

The pope is scheduled to visit the United States in September to participate in the World Meeting of Families in Philadelphia, which runs Sept. 22-27.

The Vatican secretary of state, Cardinal Pietro Parolin, said in early January that he expects the pope also will visit Washington, where he has been invited to address a joint session of Congress, and New York, where he has been invited to address the United Nations. The cardinal provided no dates for the pope’s travel and did not mention where else, if anywhere in the U.S., he would visit.

Pope Francis also has been invited to other parts of the United States, and he has said he wants to go to the U.S.-Mexico border. Mexican President Enrique Pena Nieto said last June when they met that Pope Francis told him he would accept the invitation to visit Mexico, though he did not say when. In a pastoral trip to Nuevo Laredo Jan. 10, Archbishop Christophe Pierre, apostolic nuncio, remarked that there was “joy and hope” that the pope would visit Mexico, but that he had no information about dates.

At the time of Blessed Serra’s beatification, protesters demonstrated against the action and spray-painted graffiti on the walls of a San Diego museum named for the friar. Critics, including representatives of Native Americans, said Blessed Serra brutalized Native Americans and suppressed Indian culture. A 1986 report by the Diocese of Monterey, California, defended Blessed Serra, saying his reputation had been attacked “without proof or documentation.”

The National Assembly of Religious Women, a now defunct grass-roots organization, said at the time that the Vatican “failed to consult adequately” with Native Americans before beatifying Blessed Serra, and that he “was guilty, along with many others, of extreme brutality toward California Indians.”

Hackel said he expects some of those controversies to surface again, but he thinks this time the debate about Blessed Serra could be a constructive conversation.

“He was uncompromising,” Hackel said of the priest. “Without a doubt some Indians will oppose this. But others are rejoicing.”

Working through the controversies “will be a good thing,” he said. “It can lead to reconciliation and mutual understanding.”

NEXT: Archdiocese of St. Paul and Minneapolis files for bankruptcy protection