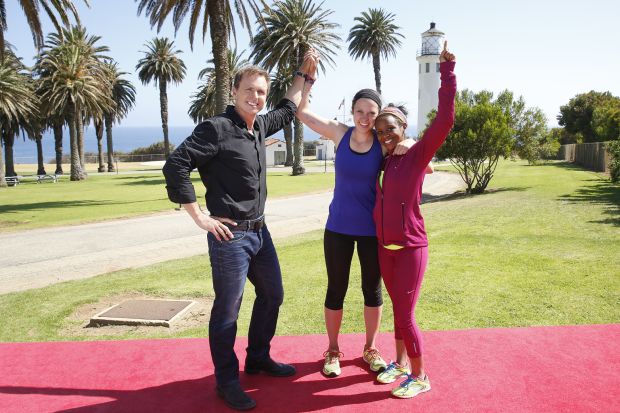 “So cool to see a celebrity,” Kasten told her as she arrived Jan. 5 at the Catholic school for girls for a talk and question-and-answer with students and faculty.

Warren smiled as she disagreed with his depiction of her, shaking her head and saying, “Oh, Mr. Kasten, I’m still Maya.”

Warren and race partner Amy DeJong, a fellow food scientist and University of Wisconsin-Madison doctoral student, officially won the event with the televised finale Dec. 12, though the actual competition ended six months earlier. Racers left the United States May 31 and returned June 22, undertaking a series of challenges in nine countries on four continents and covering 26,000 miles.

The winners collected $1 million, but their entry wasn’t about money, “getting airtime (or) about always getting to the finish-line first — we only got there once,” Warren said with a laugh about the last of 12 episodes.

The reason was altruistic.

“It was about being strong women representing the field of food science, representing our homes, our families and friends,” she said. “We were trying to make an impact and inspire.”

Warren and DeJong, the third female team to win in the show’s 25 seasons, encouraged and helped the other racers, sharing a cab or giving them directions. 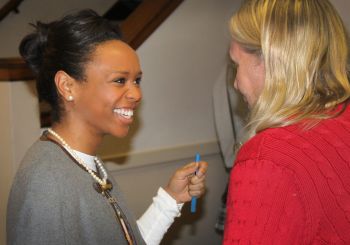 “Why would you put people down so you can beat them?” Warren asked. “Winning is awesome, but what we’re most proud of is staying true to who we are and showing that you can run a hard race and compete without putting people down. You don’t have to be nasty, dirty or mean. In life, you can prosper by simply being who you are. Niceness does pay off.”

Warren, 29, enjoyed the other competitors, and she gained “friends for a lifetime,” part of “The Amazing Race” family of competitors. She even had nice words for a team who lied to the scientists to throw them off course.

A 2003 graduate, Warren credited Rosati-Kain with teaching her the value of education and how to be a strong leader and a woman who does not give up. The student council president her senior year, she is a founding member of the student-led Kairos retreat program, ran track and cross country and was a cheerleader.

“I always knew that no matter what … I always was accepted,” she said. “Rosati-Kain is a place of acceptance of unique individuals; it doesn’t matter where you come from or who you are, you always have something to bring to the table, and that is always valued.”

At Carleton College in Northfield, Minnesota, where she received her undergraduate degree, the differences in Warren’s approach were valued as well. “So, Rosati-Kain taught me how to be a woman who can go into a place that’s brand new and take charge,” she said.

It was Warren’s idea to audition for “The Amazing Race,” convincing DeJong, 24, to be her partner on the around-the-world adventure. “Never underestimating who I am and always valuing who I am definitely came into play,” Warren said.

The duo wrote a skit for the one-minute audition, believing that they offered something unique as women who are scientists researching ice cream and candy.

Though she just wanted to experience life, have fun and inspire people, Warren said she could see God by her side during the race. A Baptist, her parents instilled that belief in her, and Rosati-Kain reinforced it.

In her presentation, Warren told students that she chose to forego a career in medicine to pursue a field in which she found her passion. Accepting a request at the end of her talk she did a “victory lap” around the gym much as she did on the show. Self-described as super-energetic, she added, “I literally love life.”

NEXT: Catholics in Congress: What makes them tick?