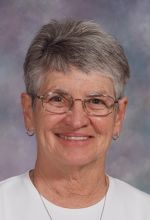 Sister Joan Schmal, O.S.F., (formerly Sister Joselle), 82, died Dec. 22 in Assisi House, Aston. She had been a professed member of the Sisters of St. Francis of Philadelphia for 61 years.

Sister Joan was born in Philadelphia where she was a member of St. Boniface Parish and a graduate of John W. Hallahan High School. She entered the congregation in 1951 and professed her first vows in 1953.

She ministered primarily in education and in social services. In 2000 Sister Joan received the Educator of the Year Award from the Caron Foundation for her work as a prevention/intervention specialist with Shalom.

Sister Joan’s years in ministry began as a teacher at Sacred Heart School in Allentown. From there she moved to her native Philadelphia where she taught in Catholic schools for 57 years, including Our Lady of Perpetual Help in Morton, St. Ludwig in Philadelphia, and Little Flower, Hallahan and St. Hubert high schools.

From 1990-2005 she worked in social services with Shalom. In 2005 she began volunteering at Assisi House, a ministry she continued until 2009 at which time she became a resident of Assisi House and served in prayer ministry.

Sister Joan’s funeral Mass was celebrated Jan. 2 at Assisi House. Burial was in Our Lady of Angels Cemetery in Aston. She is survived by her sister, Alma Bradbury, nieces and nephews, and her Franciscan family.

NEXT: Dominican sister who worked on retreats dies at 87