Catholic official: Funding running out for Iraqi refugees in Jordan 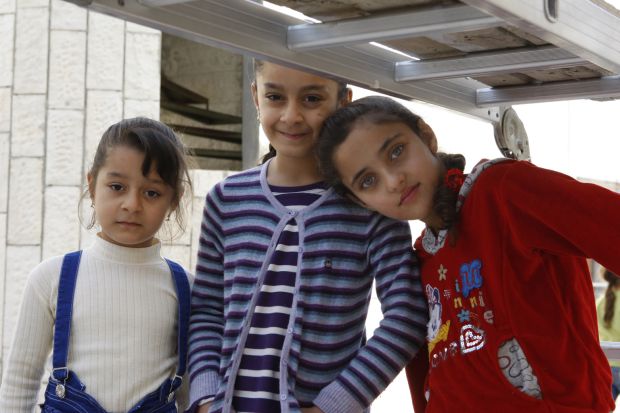 Iraqi refugee children pose outside the Syriac Catholic Church of Our Lady's Assumption in Amman, Jordan, in late October. A Catholic official warned that funding will soon run out for the refugees, who fled Islamic State militants. (CNS photo/Barb Fraze)

AMMAN, Jordan (CNS) — A Catholic official warned that funding will soon run out to feed and house thousands of Iraqi Christians sheltering in Jordan after being made homeless by Islamic State militants.

Syriac Catholic Father Noor Alqasmosa, who is charged with helping the refugees, told Catholic News Service that the funding situation is desperate, as the chances for many to restart a new life now further dim.

The priest said many Iraqi Christians probably will not be able to seek resettlement in the United States or other Western countries in 2015 because these countries appear to give priority to Syrians fleeing their nearly four-year conflict.

“I was shocked when I was told that neither the U.S. nor the EU would take in Iraqi Christians from Mosul and Ninevah for resettlement,” said Father Noor, as he prefers to be called.

“We had everything in Mosul and left with nothing,” the Iraqi priest said following recent talks with U.N. and foreign government officials in the Jordanian capital.

“We have Caritas funding lasting just until the end of February to help the 7,000 Iraqi Christians in Jordan,” the priest said, his voice lowering with concern and strain visible on his face. “There is no hope among the people. They believe the world has abandoned them and are leaving them to die.”

The bulk of the international assistance for displaced Iraqi Christians and other religious minorities is going to northern Iraq. 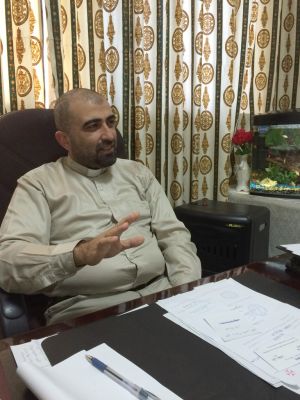 Father Noor Alqasmosa gestures during a Dec. 31 interview in his office. Father Alqasmosa, who is charged with helping Iraqis in Jordan, warned that funding will soon run out for the refugees, who fled Islamic State militants. (CNS photo/Dale Gavlak)

There, the majority of the displaced shelter after Islamic State militants brutally overran Mosul, Iraq’s second-biggest city, and the Ninevah Plain last summer. The Christians have called these northern areas home for the past 16 centuries. The Islamists told them to convert to Islam, pay tax, flee or be killed.

It’s unclear how many Christians are among the 2 million internally displaced in Iraq because the U.N. said it does not track individual figures for religious minorities.

Many Iraqi Catholics, such as Hala, a 32-year-old pediatrician, see Jordan as a temporary place for their onward journey out of the Middle East. She has relatives in Sweden and hopes to apply for family reunification with them, rather than refugee resettlement, which now seems out of reach.

Iraqi Christians with direct relatives — such as a mother, father, sister or brother — may apply for family reunification with the country where the relative lives, but approval is not guaranteed.

“I believe this awful situation with IS will continue for years, not days or months,” said Hala, a petite, bespectacled brunette who arrived in Jordan in August and chose only to use her first name.

Now she shares a cramped, makeshift shelter with 40 other Iraqi Catholics inside St. Ephraim Syriac Orthodox Church perched high on one of Amman’s hills. It’s one of 17 churches housing Iraqi Christian refugees.

“We lost our homes, jobs, money and lives there. Everything has been reduced to zero,” she said, tears welling in her eyes. “Even if IS were destroyed quickly, we couldn’t go back home because we no longer have any confidence that we would be protected or safe.”

Hala and the other Iraqi Catholics know church authorities would prefer for Christians to remain in Iraq, their historic homeland.

“But even our churches have been turned into mosques,” she said. “They’ve been destroyed, especially our beloved St. Ephraim Church in Mosul was turned into a mosque shortly after the Islamist takeover of the city.”

Hala said that after the 2003 U.S.-led invasion of Iraq, she and other Christians were obliged to don the Islamic headscarf to avoid problems with fundamentalist Muslims, but things have worsened and become far more dangerous since the Islamic State onslaught.

“It’s plain to see that those Christians who remain in Iraq will be caught in the struggle between Sunni Muslims and Shiites,” said Abu Zeid, 75, a former teacher who fled Mosul with his family and now shelters with others at the church. He used his familial nickname.

Father Noor said the more Christians flee Iraq, the smaller the community will become and the less weight it will carry vis-a-vis other groups.

But for now, his major concern is how to keep those Christians in Jordan fed and sheltered.

Church aid agencies in the U.S. and Germany “are aiding Caritas Jordan, and there is some help from the papal fund,” he said. “But there has been no other assistance from the international community. Caritas is facing great difficulty in providing for the refugees.”

Jordan’s King Abdullah II opened doors to the refugees last August, and the international Catholic charity, Caritas, has mainly provided housing and other support. The tiny desert kingdom is already straining under the weight of aiding 1.6 million Syrian refugees, in addition to 200,000 Iraqis who fled the aftermath of the 2003 U.S.-led invasion.

But UNHCR said there is no favoritism when it comes to resettling refugees.

“We don’t preference caseloads. Resettlement is based on vulnerability. UNHCR does not technically do resettlement. Rather, countries come forward and say we have room for X, Y and Z,” said Aoife McDonnell, a UNHCR spokeswoman in Amman.

McDonnell told CNS that it is difficult to resettle every single refugee elsewhere in the world because Western countries offer limited spots.

“We don’t have the capacity to resettle everyone. We don’t have enough donor countries to come forward,” McDonnell said. “We are working on the advocacy side so that people who really do need to be resettled can be. And we hope that more countries will come forward to support that.”