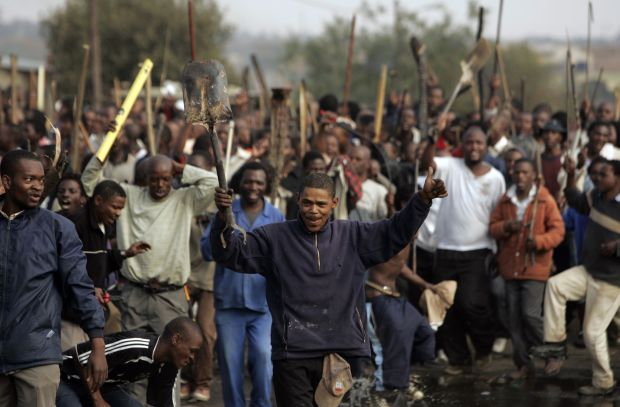 CAPE TOWN, South Africa (CNS) — A week of violence targeting foreign nationals and their businesses in Soweto and other Johannesburg townships is a national disgrace and “continues South Africa’s shameful history of xenophobia,” said The Jesuit Institute South Africa.

The attacks and looting that left at least four people dead started Jan. 19 when a Somali national allegedly shot and killed a 14-year-boy who was among a group attempting to break into his shop in Soweto. By Jan. 26, police had arrested more than 160 people for the attacks.

“The savagery demonstrated and the failure to put a stop” to the violence “is deeply disturbing and displays a failure of the state to put an end to such behavior, both by the enforcement of the law and the education of citizens in respect of the rights of foreign nationals,” the institute said in a Jan. 23 statement from its Johannesburg headquarters.

With some South African officials denying that the attacks are motivated by xenophobia, The Jesuit Institute said, “An attack on and the systematic looting of a shop that happens to be owned by a foreigner may not necessarily be xenophobic, but a systematic series of attacks on over 80 such shops and foreign-born persons cannot simply be explained away.”

The fact that the attacks appeared to be coordinated “makes this not so much acts of criminality as acts of political violence against a group. That’s xenophobia,” the institute said.

Xenophobia “is a flagrant act of contempt for the culture of human rights central to our constitution,” the statement said, noting that the bill of rights “does not discriminate between citizens and noncitizens.”

Many young South Africans feel hopeless, The Jesuit Institute said, noting that frustration among the poor is mounting with the government’s failure to address “the growing gap” between the rich and the poor.

Xenophobic violence “is symptomatic of the deep structural problems in South Africa, and foreign nationals have become scapegoats,” it said.

South Africa “must put an end to the shameful phenomenon of xenophobia and xenophobic violence by systematic civic education and by facing the social, economic and political cocktail that leads to fear, hopelessness and anger,” it said.

The institute and its partner organization, Jesuit Refugee Service, called for “all parties involved in these criminal acts to allow the law to take its course and to refrain from targeting vulnerable sectors of the community and victimizing foreigners.”

They urged dialogue “between church leaders, community leaders, local businesses and foreigners” and warned communities “to be wary of being used as pawns” by local business owners.

“Let us look for ways of working together and peaceful co-existence,” they said, noting that the government should educate citizens on the positive social and economic contributions that migrants make to South Africa.

In another Jan. 23 statement, Father David Holdcroft, regional director of Jesuit Refugee Service, called on people “to remain calm in this climate of increasing fear and discontent toward refugees and foreign traders and where opportunistic criminals are targeting vulnerable sectors of the community.”

The Jesuit Institute said that “welcome and hospitality” are key concepts of the Christian faith.

During apartheid, South Africa’s system of racial segregation and discrimination that ended in 1994, other African countries gave refuge to anti-apartheid activists, “often putting themselves at risk of attack by the South African war machine,” it said.

“Our people were treated with warmth and generosity. They were not robbed, murdered, or attacked,” it said.

“Successful states welcome migrants, who bring with them skills, knowledge and a spirit of enterprise that builds up nations,” the institute said, noting that “all research points to the fact that immigration supports economies, generates jobs, and makes societies prosperous in the long run.”

More than 60 people were killed and more than 30,000 people were displaced in attacks on foreigners around South Africa in May 2008.

NEXT: Education, awe must mark approach to other religions, pope says