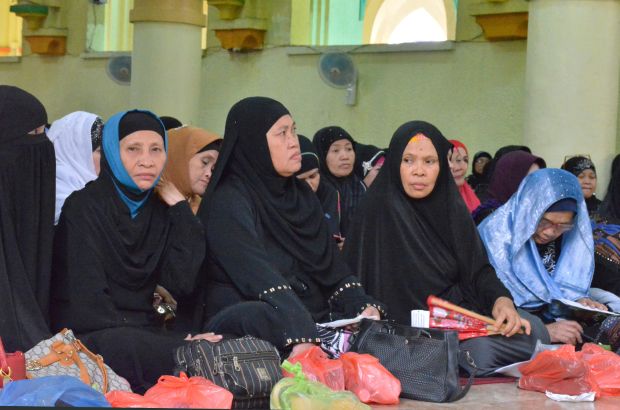 Muslim women attend a Jan. 12 seminar on the "Way to Paradise" inside the Golden Mosque in Manila, Philippines. Some were neutral on the Pope Francis' upcoming visit to the Philippines. (CNS photo/Simone Orendain)

MANILA, Philippines (CNS) — Some Muslims in the Philippines hope Pope Francis will publicly show support for a peace pact between the country’s largest Muslim rebel group and the government during his Jan. 15-19 visit.

Other Filipino Muslims have said they simply respect the pontiff and see him as a fellow-believer in God.

At Manila’s largest mosque in a predominantly Muslim neighborhood, scores of women, mostly in black burqas, recently attended a seminar on how to attain paradise. In a partitioned section of the long prayer room bearing a gold-colored dome, a few women talked to Catholic News Service about the pope’s pending visit.

“We respect (the Catholic) faith and for us, our belief is that he’s just a normal person,” said a woman who identified herself only as Farhana, who has lived in Manila almost all her life.

Mimi Pangcoga said it would be OK whether or not Pope Francis came. The longtime Manila resident said: “For us, (Christians) are brothers and we all believe in God, who made the world.”

CNS talked to a sampling of Muslims around the Philippines. Those in Manila were more or less neutral on the pope, while those in the South welcomed his coming as something that could boost efforts to form lasting peace in their region.

With the peace agreement signed, government and Moro Islamic Liberation Front officials have focused on getting a measure passed that would form an autonomous region in the southern islands of Mindanao; it would be called Bangsamoro.

Mohagher Iqbal, the Islamic front’s chief negotiator, has said the pontiff’s peace and reconciliation stance could be a “morale booster” for their cause.

“The pope is not just an ordinary person or a priest, but he is the head of Catholics throughout the world,” Iqbal told Catholic News Service. “It’s something that is very, very beneficial as far as peace is concerned, as far as humanity is concerned.”

During the time of Spanish colonization of the Philippines, the predominantly Catholic government pitted Christians against Muslims in the South. The fight evolved into a conflict between Muslim rebels and government forces that, in the last four decades, left more than 120,000 dead and millions displaced. After nearly 20 years of on-and-off negotiations, with some failed attempts ending in fighting, both sides formed a peace pact that they signed last March.

Iqbal said the rebel group’s chairman wrote a letter to the pope expressing the oneness of the Islamic Front with the upcoming visit and urging him to say something publicly about the peace agreement.

“Pope Francis is very likeable,” said Mussolini Lidasan, executive director of the Al Qalam Institute for Islamic Identities and Dialogue at the Jesuit-run Ateneo de Davao University in Mindanao. “He’s very straightforward. He’s very down to earth. It reminds us of the life of the Prophet Muhammad.”

Lidasan similarly said it would be a “big help” if, during his visit, Pope Francis could express publicly the importance of passing the law that would form the Bangsamoro region.

He said the pontiff embodies the provisions of the Second Vatican Council, which opened the church to “interreligious dialogue, accepting diversity and multiculturalism.”

“And he’s really the guy who shows that, who symbolizes that,” he added.

PREVIOUS: Markets cannot be the answer to economic inequities, pope says in book

NEXT: Pope speaks to Buddhists, Hindus, Muslims in Sri Lanka