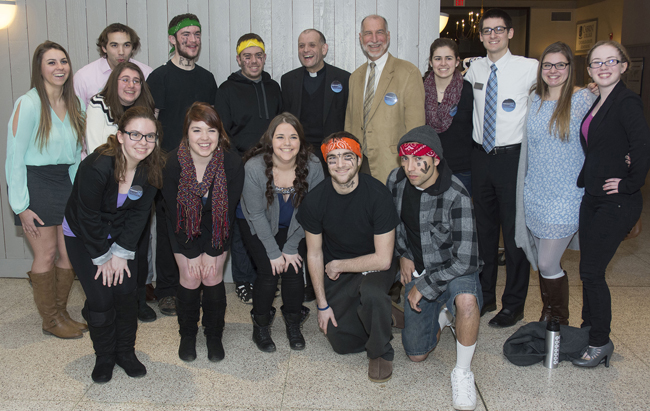 Despite their smiles, Cabrini College's ambassadors of Catholic Relief Services presented the serious topic of the trials of unaccompanied minor immigrants, and that facet of human trafficking, at Cabrini's day of awareness on the issue Feb. 5. (Photo by Linda Johnson) 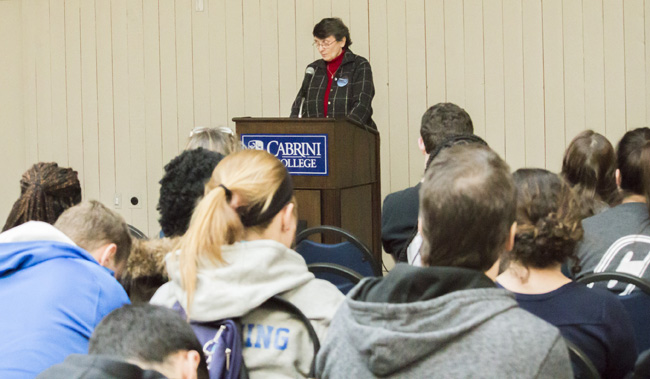 Cabrini College in Radnor marked the first International Day of Prayer and Awareness Against Human Trafficking with a series of events in which 150 Cabrini students and others participated on Thursday, Feb. 5.

The day included a morning Mass commemorated to St. Josephine Bakhita, who as a child in 19th-century Sudan was kidnapped and sold into slavery and later as a free woman in Italy entered the convent. Canonized in 2000 she is remembered for her holiness and is considered a patron saint for those who are trafficked.

“This is our mission,” said Thomas Southard, director of the Wolfington Center, where the event was held. “We really believe in Mother Cabrini’s ideal of a Catholic college as an education of the heart.”

A mid-afternoon program was quite different from a typical afternoon of classes. “Human Trafficking: A Dawning Experience,” presented by  Missionary Sister of the Holy Rosary Terry Shields, discussed the most common local form of human trafficking in which the majority of the victims are born, live and will die in the United States. It is the prostitution industry.

Later in the day the ambassadors of Catholic Relief Services at Cabrini College led participants through an award-winning presentation around immigrant experiences. The aim was to increase awareness of one of the facets of human trafficking through a simulation of the journey of unaccompanied minors trying to enter the United States.

The day closed with an ecumenical service led by Rev. Joseph Modica, the chaplain of Eastern University, with Catholic, Protestant, Jewish and Muslim clergy participating. The aim of the service was to pray for change and push for action on the issue of trafficking.

Also attending the event were Father Friedrich Bechina, undersecretary of the Pontifical Congregation for Catholic Education, and Michael Galligan-Stierle, president and CEO of the Association of Catholic Colleges and Universities who were on campus as part of a scheduled visit.

“Our member campuses have graciously opened their doors to share with Father Bechina the many ways they advance Catholic identity and university mission,” Galligan-Stierle said. “I am confident this educational opportunity will bring to light the blessed opportunities and surmountable challenges faced by U.S. Catholic colleges and universities.”

PREVIOUS: Sister’s work in Germantown lifts women out of prostitution