Sister’s work in Germantown lifts women out of prostitution 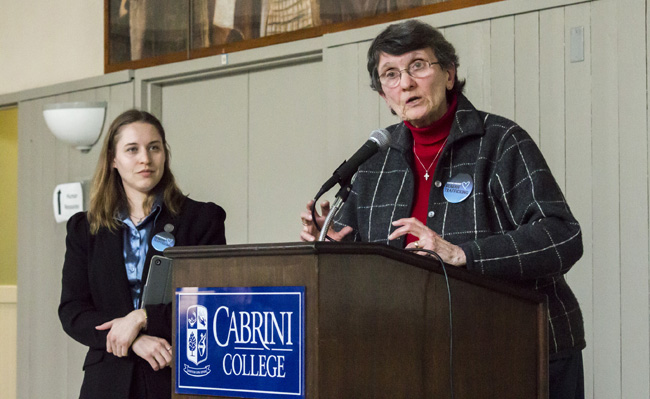 Missionary Sister of the Holy Rosary Terry Shields, right, speaks during the first International Day of Prayer and Awareness Against Human Trafficking Feb. 5 at Cabrini College. Alongside her is Melanie Paccillo, co-coordinator at Cabrini Action and Advocacy Coalition in New York. (Photo by Amy Held)

Sister Terry Shields spoke about human trafficking and prostitution at Cabrini College’s International Day of Prayer and Awareness Against Human Trafficking on Thursday, Feb. 5, and they are topics she knows well.

She is president of Dawn’s Place, a residential program based in Germantown that assists women who have been trafficked for commercial sex who wish to break the cycle.

It traces back to the 1990s when she was part of a coalition mostly composed of sisters from various congregations who were meeting on a regular basis through archdiocesan Catholic Social Services on issues involving social justice. She herself is a member of the Missionary Sisters of the Holy Rosary.

When the issue of human trafficking from foreign countries arose, especially women in the sex industry, the coalition discussed what could be done to assist them.

Sister Terry had been working for eight years with local women who had been prostituted and realized there were no programs to help them.

DeFusco and Sister Teresita, joined by Sister Terry, St. Joseph Sister Kathleen Coll and attorney Marissa Bluestin, spearheaded the foundation of Dawn’s Place, named in memory of a prostituted woman who was murdered in Camden.

It opened in 2007 on its present property that was donated by the Religious of the Good Shepherd.

Typically the program includes one year residency while the woman gets her life together, but if that is insufficient for her to be settled in a job the term can be extended. Sister Terry estimates 60 women have been through the program — 11 international, the rest Americans.

The average age of a woman coming into the program is late 30s, Sister Terry estimates.

“Young people really believe their pimp loves them, and that’s part of the problem,” Sister Terry said. “They come from families where there was no love and they are looking for it. The traffickers and pimps know how to control them. If they don’t do it through beatings or drugs, they do it emotionally, telling them, ‘I send you out to make money but you are special, I love you.’”

The women who come to Dawn’s Place live in community. They perform chores, go shopping and eat together every night. If they have substance abuse problems as many prostituted women do, they continue going to such outside programs as AA or NA.

While substance abuse is a common problem, Sister Terry believes the women “are not prostitutes because of a drug habit. They got the drug habit after they were prostituted.”

From her observation about 85 percent of the women they see were abused as children and come from extremely dysfunctional homes.

“It’s a difficult issue because it is very hard for a woman to admit to the fact that she had been abused as a child,” Sister Terry said. “She has no problem saying she was prostituted, because most of them have been arrested and we know it. But that’s an issue that until we get them to talk about it, it is something they have to deal with.”

Dawn’s Place is more than a shelter; it is a program that is individualized to the person. The women may work for a high school equivalency diploma or enroll in an English as a Second Language course. Some have gone on to community college, and one former resident has even joined the staff.

Not every woman who comes stays the course, but for those who do leave, Sister Terry believes, their time at Dawn’s Place was really part of a journey that will continue somewhere when they are ready, and one thing they will take with them is the knowledge that they were loved.

While Dawn’s Place was founded on Catholic social teaching principles, with a number of women religious involved, it is not a Catholic Church agency, Sister Terry emphasizes. It cooperates with other like-minded programs with or without denominational affiliations. For the most part very little government money is involved other than the food stamps the residents use to buy their food. It relies very much on the good-will donations of individual or foundations.

The donors in turn appear to be getting a good bang for their buck.

Learn more about Dawn’s Place at the website www.ahomefordawn.org