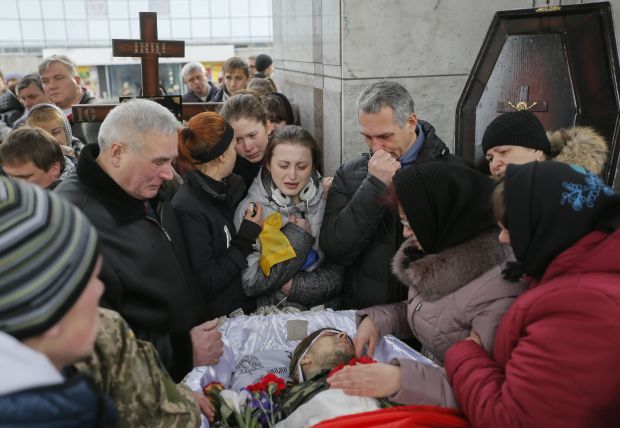 Ukrainians attend a funeral in Kiev Feb. 2 for a serviceman killed in the eastern Ukrainian conflict with Russia. (CNS photo/Sergey Dolzhenko, EPA)

A prayer for peace in Ukraine

PHILADELPHIA (CNS) — The Ukrainian Catholic bishops in the United States appealed for daily fasting and prayer for the citizens of Ukraine, their elected officials and the Ukrainian army.

They also called for prayers for “the conversion” of pro-Russian separatists in eastern Ukraine and “for unity and independence” for the nation.

The bishops said they made the appeal in unison with Archbishop Sviatoslav Shevchuk of Kiev-Halych, Ukraine, and the other Ukrainian Catholic bishops, who have asked Catholics in their country to fast and pray daily.

On Feb. 12, a new cease-fire agreement was reached, offering some hope the strife would end. It was to take effect at the start of Feb. 15. Previous cease-fires have not held.

The U.S. Ukrainian Catholic bishops urged Catholics to fast and pause from their daily activities “for an extended amount of time to reflect and pray for the people of Ukraine.”

“Meditate on the horrific sufferings of the people of Ukraine, as you pray to God for peace and unity. Pray to the mother of God for her intercession with her son, Jesus Christ, and for her maternal protection of the people of Ukraine,” they said. “Pause to identify with the suffering as you pray for peace. Sacrifice valued time and thought in prayer for our brothers and sisters who suffer.”

In Ukraine, the fighting has gone on since April 2014 and has left about 5,400 dead and 1.2 million people uprooted.

The International Rescue Committee said Feb. 12 it would send an emergency field team to Ukraine amid reports of rising violence in the countdown to the cease-fire. It described humanitarian needs as great.

“Concerns are highest for people still residing in nongovernment-controlled areas, where basic services like power, water and access to savings and pensions have been disabled for weeks,” the agency said.

“Those remaining in the conflict zone are primarily taking shelter in basements with no source of heat in near freezing temperatures. Food and medicine are also in short supply,” it added.

Those who have been displaced also need food, medicine and other basic supplies as well as money for rent, the committee said, adding that it would pay particular attention to assisting “vulnerable populations including the Roma ethnic minority, women and girls, and older people.”