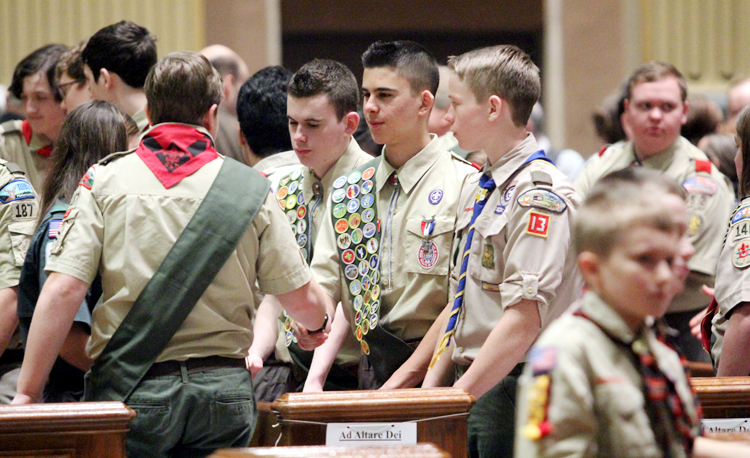 At the annual Mass for Boy Scouts Feb. 7 at the Cathedral Basilica of SS. Peter and Paul, well-decorated Eagle Scouts exchange a sign of peace. (Sarah Webb)

One of the greatest features of the Boy Scouts of America is its respect for the religious traditions of its members. Many of its packs and troops meet in church facilities and include religious-oriented special programs.

For younger Catholic scouts there is the Parvuli Dei (Children of God) Program and for older scouts the Ad Altare Dei (To the Altar of God) program, a title taken from the prayer recited by generations of altar boys at the beginning of the old Latin Mass.

Emblems for these programs as well as a newer program, the Pope Pius XII program, and also Scoutmaster Awards, were given on Saturday, Feb. 7 at the Cathedral Basilica of SS. Peter and Paul to approximately 250 scouts and leaders from the Philadelphia area.

Principal celebrant and homilist of the 11 a.m. Mass and presider at the award ceremony that followed was Auxiliary Bishop Michael Fitzgerald, which was appropriate because he was himself a scout as a young boy in St. Clement Parish, Philadelphia.

“One of the models of a scouting organization is to fulfill our duties to God and country and to others,” Bishop Fitzgerald said in his homily. “In a particular way we recognize today you’re fulfilling those duties and you are learning in a deeper way to do that as you go through life.”

Actually a fair number of priests have Boys Scouts in their background, which says something about the program.

“I grew up in Presentation Parish, Cheltenham, and I had a wonderful experience in scouting,” said the Cathedral’s rector, Father G. Dennis Gill.

“I especially enjoyed the camping trips and I still have a lot of my patches and emblems.”

But of course, the important thing is what the boys and young men of the here and now think about the Boy Scouts of America.

Daniel O’Connell (who has about as distinguished a name from Irish history as one can get), is with Troop 52, Our Lady of Mount Carmel Parish in Doylestown. He’s been with scouting for seven years and is an Eagle Scout, and just received the Pius XII Award. “I enjoy scouting and I’ll continue on into Venture Scouting,” he said.

Joseph Kroszner of St. Agnes Parish and Troop 187 in Sellersville just received the Ad Altare Dei Award, and he finds the Scouts not only fun, but “you get all these opportunities you can apply to everyday life,” he said.

Stephen Philips of Pack 380 in Newtown, who just received the Parvuli Dei Award, observed that in Scouts, “you get to have adventures and grow stronger in your faith.”

Boy Scouts more often than not is a family affair with boys following their older brother or even fathers into scouting.

“Scouts are fun; I like the camping and fishing,” said Alex Malone of Pack 91, of Lions Club, Harleysville, who received the Parvuli Dei Award just as his brother Alex did last year.

By the way, if you think Boy Scouts of America is just for boys, think again. In the upper age groups for Sea Scouts and Adventure Scouts it is coed.

Among the awardees for the Ad Altare Dei was Samantha Cathers, Crew 52 of Our Lady of Mount Carmel and for the Pius XII Award, Raegan Gabage, Ship 201, Immaculate Conception B.V.M. in Jenkintown.

NEXT: Sister’s work in Germantown lifts women out of prostitution