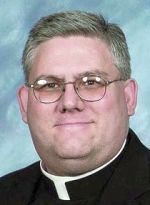 Father Louis J. Kolenkiewicz, 47, associate pastor at St. Bede the Venerable Parish in Holland, Bucks County, has been placed on administrative leave over concerns regarding his suitability for ministry.

The Archdiocese of Philadelphia announced the decision by Archbishop Charles Chaput on Sunday, Feb. 15 following announcements at all Masses over the weekend at St. Bede’s.

The concerns do not involve allegations of illegal or inappropriate contact with a minor, according to an archdiocesan statement, but constitute alleged violations of the archdiocese’s Standards of Ministerial Behavior and Boundaries.

The archdiocese also said the concerns do not relate to Father Kolenkiewicz’s most recent assignment at St. Bede, where he no longer resides, but to allegations that first arose in 2005.

Following the 2011 Philadelphia grand jury report on child sexual abuse by clergy, the archdiocese reviewed all of its clergy personnel files.

As a result of the review, Father Kolenkiewicz was placed on administrative leave in September 2011 over concerns of his suitability for ministry at that time of the 2005 alleged violations of the standards.

Law enforcement reviewed the issue in 2005 and in 2011 and did not file criminal charges at either time.

New information on the allegations was received recently by the archdiocese, and as a matter of policy they were reviewed again. “In an abundance of caution,” the statement said, Father Kolenkiewicz was placed on administrative leave.

While suspended he is not permitted to exercise public ministry, administer any of the sacraments, or present himself publicly as a member of the clergy.

During his 2011 suspension, the file of Father Kolenkiewicz was investigated by the archdiocesan Office of Investigations and its report submitted to the Archdiocesan Professional Responsibility Review Board. The 12-member panel with professional backgrounds in the investigation and treatment of child sexual abuse functions as a confidential advisory committee to the archbishop, which assesses allegations of sexual abuse as well as allegations of violations of the standards.

The board “thoroughly reviewed the matter and provided a recommendation to the archbishop, who made the decision to return Father Kolenkiewicz to active ministry in June 2014” with assignment to St. Bede Parish, the archdiocesan statement said.

The archdiocese encourages anyone wishing to report a violation of The Standards of Ministerial Behavior and Boundaries to contact the archdiocesan Office for Investigations at 1-888-930-9010.

NEXT: Archdiocesan goals and results for Heritage of Faith