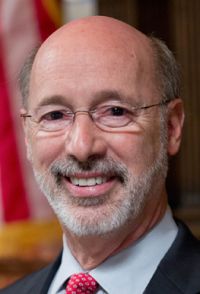 Archbishop Charles Chaput praised the announcement by Pennsylvania Gov. Tom Wolf today, Feb. 13, that he is granting a reprieve for death row inmate Terrence Williams, who was scheduled to be executed on March 4.

In a memo Wolf said he would extend the reprieve to each of the 186 inmates on the state’s death row as their scheduled executions approach, all pending the outcome of a study of the use of the death penalty in Pennsylvania.

“I’m very grateful to Governor Wolf,” Archbishop Chaput said, “for choosing to take a deeper look into these studies and I pray we can find a better way to punish those who are guilty of these crimes.”

“Turning away from capital punishment does not diminish our support for the families of murder victims. They bear a terrible burden of grief and they rightly demand justice. But killing the guilty does not honor the dead nor does it ennoble the living. When we take a guilty person’s life we only add to the violence in an already violent culture and we demean our own dignity in the process,” the archbishop said.

Wolf said there was no question Williams was guilty of the 1984 murder he committed at age 18 and for which he was convicted and sentenced to death in 1986. But the governor said he was granting the reprieve “because the capital punishment system has significant and widely recognized defects.”

The governor cited the “unending cycle of death warrants and appeals,” the cost to the judicial system for the appeals process and the surfacing of painful memories for victims’ families in each step of the process.

He also noted instances of miscarried justice due to flawed convictions and sentencing in several cases.

In the 40 years since Pennsylvania reinstated the death penalty, governors have signed 434 warrants but only three executions were performed.

“If the Commonwealth of Pennsylvania is going to take the irrevocable step of executing a human being, its capital sentencing system must be infallible,” he said. “Pennsylvania’s system is riddled with flaws, making it error prone, expensive and anything but infallible.”

The reprieves would remain in effect at least until Wolf has reviewed a forthcoming report of the Pennsylvania Task Force and Advisory Committee on Capital Punishment.

“I take this action only after significant consideration and reflection,” he said. “There is perhaps no more weighty a responsibility assigned to the governor than his or her role as the final check in the capital punishment process.”

In a statement, the Pennsylvania Catholic Conference said the state’s Catholic bishops have long advocated for an end to the death penalty “because the modern penal system provides alternatives to taking the lives of the guilty. Punishment should reflect our belief in the inherent human dignity of each person, and taking a life to avenge the death of another does not create a culture of life,” the statement read.

“People convicted of capital offenses must be punished effectively and appropriately for their crimes. Family and friends of victims, and society as a whole, demand this. Just punishment, however, can be attained without resorting to execution. Even the most violent offenders who commit heinous crimes still have a dignity given by God.

“Today’s announcement breaks the cycle of violence that so plagues our society. We hope that this spirit of respect for human life is shown throughout all laws and policies of the Commonwealth.”

Pittsburgh Bishop David A. Zubik praised Wolf for granting Williams a reprieve and “for effectively establishing a moratorium on the death penalty in Pennsylvania.”

“At the same time the church must remain committed to reaching out to victims of violent crimes and their families,” he said in a statement.

He added that research “has shown that it is not a deterrent to crime and that on occasion innocent people have been wrongly executed.”

“Catholic teaching affirms the dignity of every human person from the moment of conception until the last breath of natural life,” Bishop Zubik said. “No one is excluded, not even criminals who have committed a heinous act. God’s love and mercy is offered to all.”