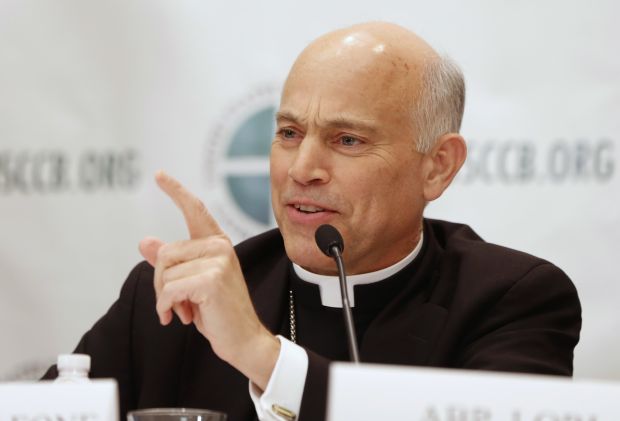 SAN FRANCISCO (CNS) — San Francisco Archbishop Salvatore J. Cordileone is forming a committee of theology teachers from the archdiocesan high schools to expand and adjust the language of proposed statements on Catholic teaching on sexual morality and religious practice to be included in the faculty and staff handbooks of the four archdiocesan high schools.

In a Feb. 24 letter to archdiocesan high school teachers, the archbishop said he would recommend that this committee submit a draft of their additions before the next school year. He also asked that they keep “what is already there” in the proposed statements he announced in early February.

The addition of these detailed statements of Catholic teaching on sexual morality and religious is scheduled to take effect in the 2015-16 school year and is not part of the teachers’ contract.

The statements cover church teaching on abortion, same-sex marriage and artificial contraception, and other tenets of the faith.

In the letter to teachers, Archbishop Cordileone stressed that Catholic schools provide a unique role in the mission of the church: “equipping our young people to be spiritually and morally fit for life, serve faithfully in their parishes, and carry on the church’s legacy of service to the poor, sick, marginalized, vulnerable and destitute in any way, as well as to respond to and faithfully persevere in the calling God gives them in their life.”

The archbishop praised Catholic school teachers for helping “young people attain these goals” and in particular for giving them opportunities to serve those in need.

He reiterated what he told them in a Feb. 6 gathering, explaining that he chose to include the statements Catholic teaching on sexual morality and religious practice because “our young people need good, solid formation” and these are “areas of church doctrine where there is the most confusion and resistance in the culture today.”

The archbishop stressed that the handbooks’ statements are “not nuanced for students or even for parents, nor are they placed in the proper context within which they need to be interpreted.”

He also said that since many teachers have spoken to him about adding material on social justice and Catholic social teaching he will expand proposed comments to include that.

Archbishop Cordileone told the teachers that after speaking with them in early February, several teachers asked him for advice about how to “effectively present the church’s teaching in a compassionate and compelling way” to students who may be struggling or “feeling rejected or unwelcomed by the church.”

“I was moved by your sincerity and commitment. Please know that I have already begun to look into resources that we can make available to you to assist you in this most important work,” he wrote.

He also noted that “this has been a very trying time for all of us” and he asked the teachers for “patience, good will and especially prayers as we continue to work toward a consensus.”

PREVIOUS: Texas bishop frames theological call to be ‘with the immigrant’