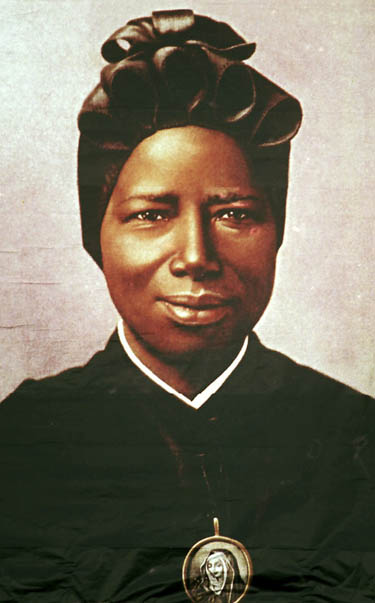 St. Josephine Bakhita, an African slave who died in 1947, is pictured in a tapestry hung at St. Peter’s Basilica during her canonization in 2000 at the Vatican. St. Bakhita was born in the Darfur region of what is now Sudan. Her feast day is Feb. 8, which this year is the first International Day of Prayer and Awareness against Human Trafficking. (CNS photo/L’Osservatore Romano via Reuters)

WASHINGTON (CNS) — The chairman of the Senate Committee on Foreign Relations said Feb. 4 that “most Americans would be stunned to know that slavery still exists in this world.”

Sen. Bob Corker, R-Tennessee, made the comments at a committee hearing meant to address the question of the “best way forward” in addressing human trafficking, forced labor and other forms of modern slavery on a global scale.

“Let me pause to say that again, it is difficult to imagine that in this modern day more than 27 million people around the world are forced to live as slaves,” Corker added.

Slavery in the modern world “is as brutal as ever, more vast than ever, but more stoppable than ever,” Haugen explained to the committee, citing that where free market labor and global abolition movements have worked to end legal slavery, “it is up to us to finish the job.”

Haugen addressed what he sees as a major cause of human trafficking: impunity.

“Slavery exists on a massive scale in the world today because there are huge swaths of the world where people don’t get in trouble for enslaving other human beings,” he said. “In some regions of Southeast Asia, you are more likely to be struck by lightning than to be prosecuted or jailed for enslaving a poor person.”

According to Haugen, increased prosecution of traffickers is key to forcing them out of the business of slavery. “Traffickers aren’t brave,” he said, adding that more strict enforcement of trafficking statutes was necessary to “sweep slavery into the dustbin of history where it belongs.”

The hearing panel then discussed the role of the United States in addressing human trafficking across the globe.

“I have come to believe that … we can create and lead a vision to end modern slavery,” Corker told the panel, and “we can lead, we can solve and we can bring others to the table” on the issue.

Bader-Blau agreed with the chairman, especially with regard to upcoming negotiations on the proposed Trans-Pacific Partnership trade agreement between
the U.S. and 12 Asian countries and how it would affect supply chain transparency and forced labor.

Its supporters say it would increase commerce and investment by reducing trade barriers among participating countries.

“Our diplomacy must be much more robust and aggressive on tackling the root causes” of forced labor, Bader-Blau told the committee, stating her belief that “it’s not too much to ask that we see real systematic changes” in how countries operate before agreeing to anything in trade negotiations.

She said worker exploitation is one of the primary methods used to enslave people in the modern world. “We increasingly hear the term ‘modern slavery’ used to describe the exploitation or compelled service of children, women and men that results from the myriad forms of coercion and deceptive practices traffickers use,” she told the committee. “Instead of shackles and chains, workers are now enslaved through threats, debt and other forms of economic coercion.”

Sen. Marco Rubio, R-Florida, asked the panel members whether they were aware of any human trafficking abuses committed by the U.S. diplomatic corps within the United States itself. He wondered if any diplomats used their status to bring domestic workers into the United States who “are not being compensated and (are) held against their will.

Haugen responded that such abuses happen and are symptomatic of the fact that “at the highest levels this is not taken seriously as a crime, as a horror and as something for which there ought to be real consequences.”

Rubio, a Catholic, commended the committee chairman for holding a hearing on “modern slavery,” stating that he believes that “calling it human trafficking tends to sanitize it” and that people ought to “start calling it what it is, which is human slavery.”

Haugen and Bader-Blau made up the first panel. After they left the hearing room, the committee then heard testimony from a second panel comprised of the vice president of Humanity United and two survivors of human trafficking.

The Catholic Church has put a spotlight on the global human trafficking crisis by declaring the first International Day of Prayer and Awareness against Human Trafficking. It will take place Sunday, Feb. 8, the feast of St. Josephine Bakhita, a Sudanese slave who eventually was freed and became a Canossian nun.

Last November, on a flight back to Rome from Strasbourg, France, Pope Francis told reporters: “Slavery is a reality inserted in the social fabric today, and has been for some time: slave labor, the trafficking of persons, the sale of children — it’s a drama. Let’s not close our eyes to this. Slavery is a reality today, the exploitation of persons.”