Father James Martin and his sister buried on same day 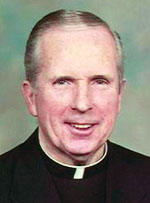 They were both born in Philadelphia to the late Charles and the late Bridget (Mulkeen) Martin.

“I was in the seminary with him; he was a very good athlete,” said Msgr. Charles McGroarty. “He never became a pastor and I think that’s because he didn’t want to, but he was a very fine priest and great guy who loved his family. Wherever he was stationed we would sometimes hold class reunions there.”

Father John Bradley, who also graduated from St. Charles with Father Martin, remembers him as “a fine priest and a devoted servant,” he said. “He was highly regarded by the class, but fame and honor didn’t interest him.”

Father Martin served as parochial vicar first at Queen of Peace Parish, Ardsley, followed by a series of Philadelphia parishes: Our Lady of Ransom, Sacred Heart of Jesus, Immaculate Heart of Mary and Holy Family.

Although he officially retired in 2004, he stayed on at Holy Family for several years before going to what was then St. Francis Country House.

For years the family home was kept up by his sister, Theresa, and was a favorite holiday and vacation spot for the family especially the brothers, according to a niece, Teresa Ravert.

“She was very generous to the nieces and nephews,” Ravert said. After her aunt entered a nursing home the property was sold to another family member so the tradition continues.

Father Martin and Theresa Martin are predeceased by a sister, Margaret Ravert and a brother, Charles. They are survived by nieces and nephews. Now the entire first generation is enjoying a reunion in heaven.