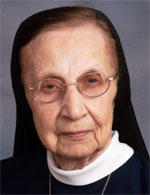 Sister M. Thomasine Etzel died Feb. 13 in Camilla Hall, Immaculata, in the 71st year of her religious life. She was 90.

Born in Phoenixville, Sister Thomasine entered the Congregation of the Sisters, Servants of the Immaculate Heart of Mary in 1943 from St. Ann Parish in Phoenixville and professed her vows in 1946.

The funeral Mass was celebrated Feb. 20 at Camilla Hall. Msgr. Joseph Logrip was the celebrant and homilist and Father William E. Dean was the concelebrant.

NEXT: Father James Martin and his sister buried on same day