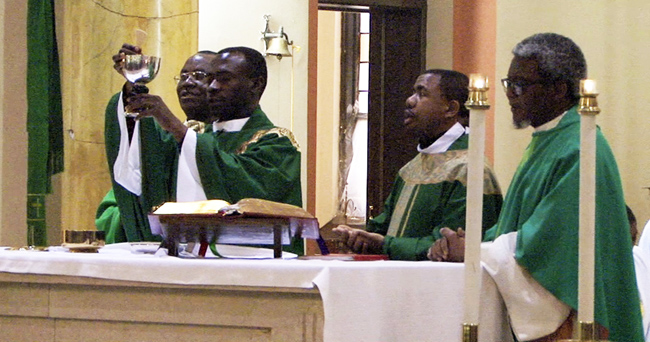 Father Livinus Ugochukwu (center), consecrates the Eucharist at a Mass Jan. 25 at Cyprian Church, Philadelphia, with the Igbo (Nigerian) Catholic community at the parish. Joining him at the altar are, from left, Fathers Onyeabor Ugochukwu, Linus Ugorji and Austin Odimmegwa. 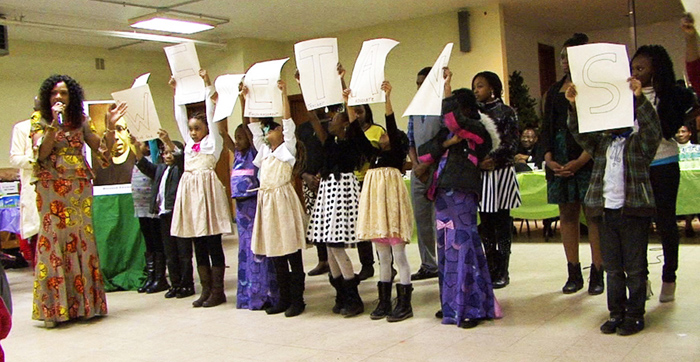 St. Cyprian Parish in West Philadelphia hosted a Mass for the Igbo Catholic community, immigrants from Nigeria who have settled in the parish, on Sunday, Jan. 25 in celebration of the feast day of Blessed Michael Iwene Tansi.

The Igbo Catholics await one more miracle attributed to Blessed Michael’s intercession that may lead to his canonization.

Father Livinius Ugochukwu, chaplain for the community under the patronage of Blessed Michael, was the main celebrant for the Mass. He also presented a music album titled “Deede Tansi,” or “My Brother Tansi.”

Father Livinius Ugochukwu, chaplain for the community, performs a song along with women of the community from the album dedicated to their patron, Blessed Michael Iwene Tansi.

NEXT: ‘The Francis Effect’ coming to local TV