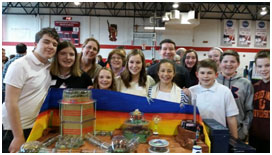 Members of the Queen of Angels Regional Catholic School students pose with their winning design.

The nationwide engineering competition invites middle school-aged students to present their vision for a city of the future. Tasks include developing a concept, writing an essay, designing the virtual city via computer program and then building a 3D model of their city.

The students were led by faculty mentors Diane Hediger and Jane Ring and engineering mentors Thomas Gennaro and his wife.

With its win in this region, the team now prepares to travel to Washington, D.C., to compete in the national Future City competition.

NEXT: Summer fun at the Academy of Notre Dame