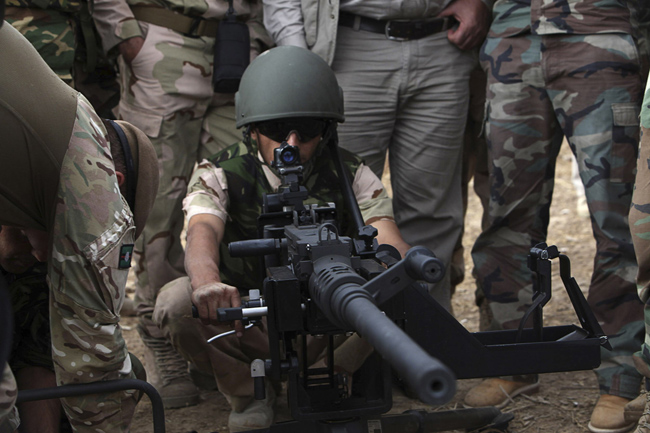 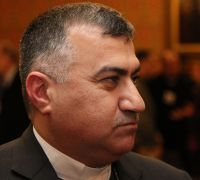 Archbishop Bashar Warda of Irbil, Iraq, as seen Feb. 9 in the House of Lords in London. (CNS photo/ Simon Caldwell)

LONDON (CNS) — A Chaldean Catholic archbishop called for the redeployment of U.S. and British troops in Iraq to prevent the “genocide” of Christians and other minorities by Islamic State militants.

Archbishop Bashar Warda of Irbil, Iraq, said he believed the U.S. had a duty to “finish the mission” in his country by ridding the Ninevah Plain of extremists who last summer drove some 120,000 Christians from their homes.

He described the Islamic State as a “cancer” which had to be cut out if it was not to infect future generations of Muslims and create a potentially greater threat than Afghanistan under the Taliban and al-Qaida.

“I would like to see American or European or international troops alongside Iraqi troops working to liberate these lands, not alone but together,” he told Catholic News Service after meeting with some British politicians in the House of Lords Feb. 9.

“Definitely, I would like to see more involvement — more airstrikes, because that is also needed,” he said.

U.S. military expertise and resources were crucial in defeating the Islamic State, he told CNS, because neither the Iraqi army nor the Kurdish Peshmerga militia were sufficiently trained or equipped for the job.

“They (the Americans) know how to tackle these terrorist groups,” said Archbishop Warda. “The sooner they finish the mission the better, because this is a cancer which needs to be stopped and treated, because otherwise we would have generations of people growing up with the Islamic State mentality.”

“We have got 1.8 million displaced people in Kurdistan,” he added. “It is not just Christians; everyone is there.”

U.S. President Barack Obama authorized airstrikes against Islamic State in Iraq Aug. 8 and expanded them to Syria Sept. 24, but has so far resisted any substantial redeployment of troops following more than a decade of military operations in Iraq.

Archbishop Warda told the meeting in London that he would like to see Britain, which took part in the U.S.-led 2003 invasion of Iraq, also recommit ground troops to his country.

“It is hard for a Catholic bishop to say that we have to advocate a military action, but we have to go for that. There is no other option,” he said, warning members of Parliament that airstrikes alone were “not enough” and that time was running out for Christian refugees who wished to return home.

“If you are a politician I beg you to focus on that, to speak about this,” Archbishop Warda continued. “Military action is needed, a powerful one where they could really get those people out of these villages so that our people and others can return. Please use all of your efforts to make this happen.”

“Your voices are needed to speak loudly about the atrocities and the genocide that is there,” he added. “We would like to see our people back home as soon as possible, and I hope that I can meet politicians here to make that point.”

John Pontifex of Aid to the Church in Need, a Catholic charity set up to help persecuted Christians, told the meeting that no minority in the world was suffering with the same intensity as the Christians of Iraq, a community which has survived in the region since the first century but was now squeezed into refugee camps around Irbil.

“Christians in Iraq face the very real threat of being wiped out,” he said. “We recognise that as far as Christianity in Iraq is concerned, Irbil represents the last stand. With Christians gone from Irbil, it is more or less game over for Christians in Iraq.”

He added: “We must be clear that this extremism that we are seeing today bears comparison with some of the most despotic regimes this world has ever known. This is not the time for vacillation … this is the time for action.”

Archbishop of Warda visited Parliament as a guest of Lord Alton of Liverpool, a Catholic peer. He addressed the General Synod of the Church of England Feb. 10 and on Feb. 11 was due to celebrate Mass in Westminster Cathedral, London, with Cardinal Vincent Nichols of Westminster, president of the Bishops’ Conference of England and Wales.

PREVIOUS: Inequity is root of all evil in economies, policies, hunger, pope says

NEXT: Culture determines if 20-minute homily is long or short, cardinal says