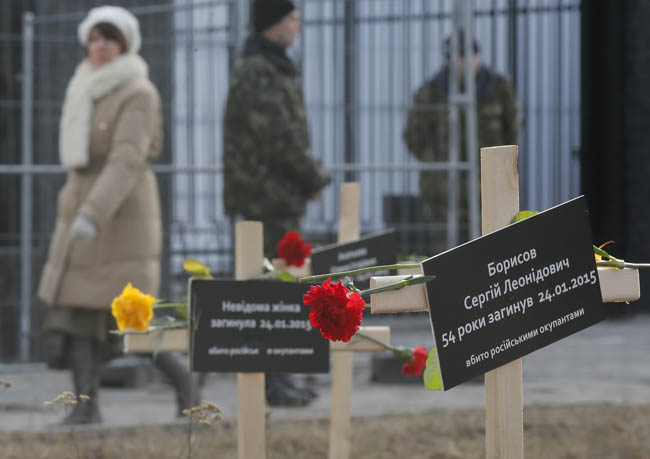 Ukrainians walk past symbolic crosses set up by protesters in front of the Russian embassy in Kiev, Ukraine, Feb. 1. (CNS photo/Sergey Dolzhenko, EPA)

Citing constant danger to Ukraine, the church leaders called the war “a crime against life” that brings “suffering and death, grief and injustice” in a Feb. 4 statement.

Archbishop Mieczyslaw Mokrzycki of Lviv, president of Ukraine’s Catholic bishops’ conference, and Ukrainian Orthodox Archbishop Filaret Kucherov of Lviv within the Moscow Patriarchate were among those making the appeal.

“But Ukraine, tired and tested, remains unbowed in its faith and dedicated effort of will,” the religious leaders said. “Before our eyes, a new state is being born, a new generation of heroes willing to sacrifice life, forget comfort and tranquility and be the first to respond to the homeland’s cry for help.”

The appeal was published as fighting intensified after a new separatist offensive in the self-proclaimed rebel republics of Donetsk and Luhansk.

It said Ukrainians had been unprepared for war and should avoid becoming accustomed “to the mundane sight of deaths and injuries” and “the grief of widows and orphans.”

“We urge mutual support, help in finding the truth and establishing unity in doubt and freedom in everything, since peace is a gift from God, the work of justice and the fruit of love,” said the signatories, who included leaders of Ukraine’s Greek Catholic Church and two smaller Orthodox churches.

“By uniting our efforts, we will overcome this aggression and evil in the name of dignity and the moral values, which will be the foundation of our invincible common future. We will safeguard the freedom granted us by God and not allow our country to be divided.”

NATO unveiled plans Feb. 5 to bolster its military presence in Eastern Europe, after Western officials accused Russia of sending troops and heavy weaponry into Ukraine, where fighting since April 2014 has left about 5,400 dead and 1.2 million people uprooted.

On Feb. 5, German chancellor Angela Merkel and French President Francois Hollande visited Kiev and were to travel Moscow Feb. 6 to present a new peace initiative. U.S. Secretary of State John Kerry said in Kiev Feb. 5 that the U.S. wanted a diplomatic solution but was currently “reviewing all options,” including the supply of “defensive weapons” to Ukraine.

In their declaration, the Catholic and Orthodox archbishops said Ukraine still needed “titanic, sacrificial work” to overcome the “disease of corruption,” which affected all of society “from senior officials to ordinary citizens.”

“But we are proud of our new heroes for their fortitude, patience and bravery, and for giving Ukraine so many examples of love of homeland,” added the church leaders, who have previously been divided over competing jurisdictions and property claims.

“We will continue to encourage unity through prayer, spiritual feats and physical accomplishments, since peace also means a struggle for life.”

Pope Francis, who will receive Ukraine’s Greek and Latin Catholic bishops Feb. 16-21 in “ad limina” visits, appealed for a “resumption of dialogue” in the country’s “tormented land” during his Feb. 4 general audience.