Go out and bring in the lost, pope tells new cardinals 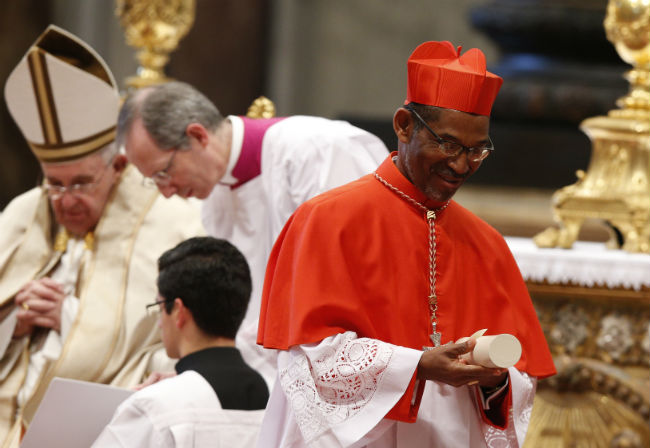 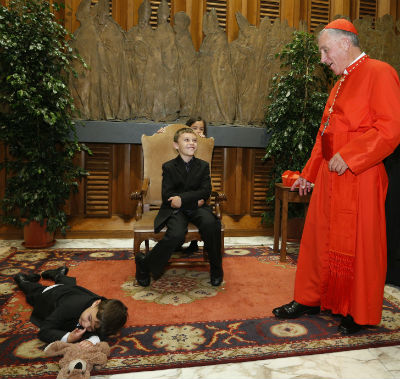 New Cardinal John Dew of Wellington, New Zealand, interacts with children who are his relatives during a reception for new cardinals in Paul VI hall after a consistory at the Vatican Feb. 14. From left are siblings Jackson McKinley, 4, Sam, 9, and Gorja, 7. (CNS photo/Paul Haring)

VATICAN CITY (CNS) — The Catholic Church cannot call itself church if it is a “closed caste” where the sick, the wounded and sinners are shunned, Pope Francis told the 20 new cardinals he created.

“The way of the church is precisely to leave her four walls behind and to go out in search of those who are distant, those essentially on the outskirts of life,” the pope said Feb. 15 as he celebrated Mass in St. Peter’s Basilica with 19 of the churchmen who received their red hats the day before and with about 140 other members of the College of Cardinals.

“Total openness to serving others is our hallmark; it alone is our title of honor,” he told the men often referred to as “princes of the church.”

The Mass capped a four-day gathering of the cardinals. They met with Pope Francis Feb. 12-13 to review ideas for the reform of the Roman Curia and Vatican finances as well as the progress made in the work of the Pontifical Commission for the Protection of Minors.

The pope’s homily at Mass with the cardinals, the meditation on love and charity he offered Feb. 14 when he created the new cardinals and his exhortation that the Curia reform emphasize its role of service echo remarks he had made as Cardinal Jorge Mario Bergoglio of Buenos Aires at the meetings immediately preceding his election in March 2013.

Evangelization presupposes that the church does not want to be locked up inside herself, but wants to go “to the peripheries, not only geographically, but also the existential peripheries: the mystery of sin, of pain, of injustice, of ignorance and indifference to religion, of intellectual currents, and of all misery,” he said in an outline of the 2013 talk that was released after his election.

Even Pope Francis’ choice of new cardinals emphasized his focus on geographical peripheries and outreach to those often excluded from society. The 20 new cardinals came from 18 countries, including the first-ever cardinals from Tonga, Myanmar and Cape Verde. In his second round of naming cardinals, he once again skipped large Italian dioceses usually headed by cardinals — notably Venice and Turin — and tapped Ancona and Agrigento, which is led by now-Cardinal Francesco Montenegro, a dedicated defender of the thousands of immigrants who risk their lives crossing the Mediterranean Sea to Europe. 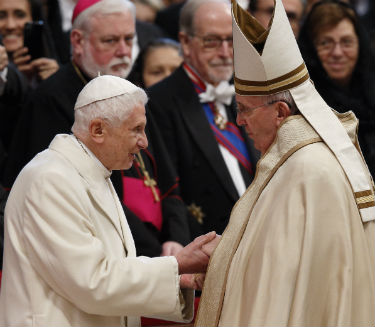 Retired Pope Benedict XVI and Pope Francis exchange greetings at the conclusion of a consistory at which Pope Francis created 20 new cardinals in St. Peter’s Basilica at the Vatican Feb. 14. (CNS photo/Paul Haring)

In the almost two years since his election, Pope Francis repeatedly has called Catholics to reach out to people on the margins of both the church and society. He also frequently cautions against the temptation of being modern-day scribes and Pharisees, who can allow obedience to the letter of the law to prevent them from reaching out to others with compassion.

The Sunday Gospel reading was St. Mark’s version of Jesus touching a leper — which was forbidden by Jewish law — healing him and, in that way, allowing him back into the community.

The purpose of the law against touching someone with leprosy and forcing them to live outside the community “was to safeguard the healthy, to protect the righteous,” the pope said.

“Jesus, the new Moses, wanted to heal the leper,” the pope said. “He wanted to touch him and restore him to the community without being ‘hemmed in’ by prejudice, conformity to the prevailing mindset or worry about becoming infected.”

What is more, the pope said, “Jesus responds immediately to the leper’s plea, without waiting to study the situation and all its possible consequences.”

“For Jesus, what matters above all is reaching out to save those far off, healing the wounds of the sick, restoring everyone to God’s family,” he said. “This is scandalous to some people.”

But Jesus, he said, “does not think of the closed-minded who are scandalized even by a work of healing, scandalized before any kind of openness, by any action outside of their mental and spiritual boxes, by any caress or sign of tenderness which does not fit into their usual thinking and their ritual purity.”

Pope Francis said there are two basic tendencies in the life of faith: being afraid of losing the saved, or wanting to save the lost. The church’s way, he said, “has always been the way of Jesus, the way of mercy and reinstatement.”

Going out in search of the lost, he told the cardinals, “does not mean underestimating the dangers of letting wolves into the fold,” but it does mean “rolling up our sleeves and not standing by and watching passively the suffering of the world.”

“The way of the church is not to condemn anyone for eternity,” he said, but “to pour out the balm of God’s mercy on all those who ask for it with a sincere heart.”