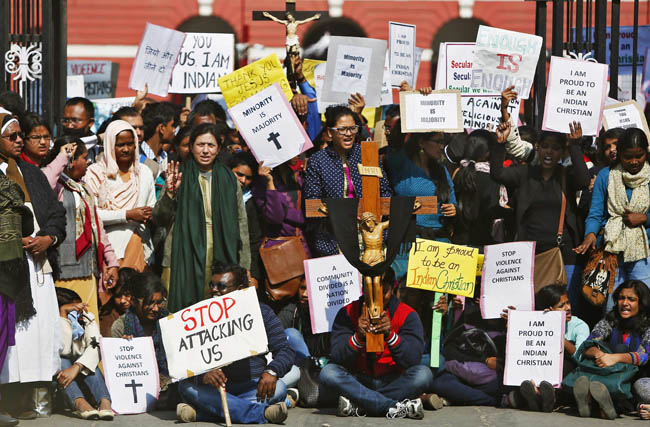 Demonstrators shout slogans as they hold placards during a protest outside Sacred Heart Cathedral in New Delhi Feb. 5. Hundreds of Christian protesters clashed with police in India's capital as they tried to press demands for better government protection amid concern about rising intolerance after a series of attacks on churches. (CNS photo/Anindito Mukherjee, Reuters)

“The people are angry, anguished and frustrated. Five churches have been attacked in Delhi in two months and yet, not a single arrest has been made so far,” Archbishop Anil Couto of Delhi told Catholic News Service Feb. 5.

“This is shocking. The government has done nothing to arrest those desecrated and attacked churches. On the contrary, the police is using force to silence our protests,” he told CNS in Bangalore, where the Conference of the Catholic Bishops of India was meeting.

Nearly 200 Christian protesters who had gathered at the gate of his cathedral in New Delhi were bundled into police buses and taken to the police station, Archbishop Couto said.

“We had not moved from the cathedral gate when the police started swooping down on us,” he told CNS from New Delhi.

“They heckled me and dragged (me) into the (police) bus. The police did not spare women and even nuns,” he said.

Father Emmanuel was held for two hours at the police station near the cathedral.

Among those forcibly taken away from the cathedral gate were Father Susai Sebastian, vicar general Delhi Archdiocese, and Catholic activist John Dayal. Protesters continued singing hymns and holding placards in the police buses.

In a statement after the arrests, the Delhi Archdiocese cited five attacks on churches since Dec. 1. One church had its entire interior burned; other incidents included smashed windows, burned statues and desecration of the Eucharist.

“The (Christian) community has lost faith in Delhi police, which has failed to solve the conspiracy that has led to the vandalism, arson and desecration of churches,” said archdiocesan statement.