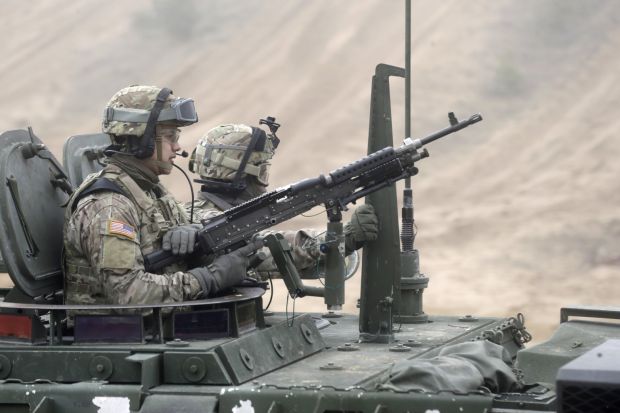 Soldiers of the U.S. Army's 2nd Cavalry Regiment, deployed in Latvia as part of NATO's Operation Atlantic Resolve, ride in an armored vehicle during a joint military exercise in Adazi Feb. 26. Catholic officials in Latvia are trying to stay out of the region's ideological war with neighboring Russia. (CNS photo/Ints Kalnins, Reuters)

WARSAW, Poland (CNS) — Catholic officials in Latvia are trying to stay out of the region’s ideological war with neighboring Russia.

“Latvia is home to a large Russian population and there are Russian-speakers in the Catholic Church. We’re sensitive to historical animosities here, which could be reignited and used politically,” said Msgr. Paul Klavins, spokesman for the bishops.

“It would be easy and dangerous for us to become involved in this ideological warfare — so our bishops have tried to stay calm and avoid taking sides,” he told Catholic News Service.

“We know we’ll always have to live with our big neighbor, Russia — this is a historical reality. But we can do so in a friendly, peaceful way, even without much closeness,” he added Feb. 26.

In February, governments in Latvia, Lithuania and Estonia announced new security measures, including the reintroduction of conscription, against perceived dangers from Moscow.

Msgr. Klavins told CNS Latvia’s Catholic bishops had taken part in ecumenical prayers with Orthodox leaders for peace in war-torn Ukraine and had encouraged their clergy to emphasize “prayer, healing and reconciliation” in homilies and public statements.

“However, there’s a lot of propaganda going on, and a feeling the secular media isn’t fully objective,” Msgr. Klavins added.

“There are also many divisions in our population, with Russians who only follow the Russian media and Latvians who only heed the Latvian. Local politicians are using the scare stories which regularly surface here.”

Latvia, Lithuania and Estonia became independent from the Soviet Union as U.N. member-states in September 1991. They joined NATO and the European Union in 2004, gaining protection under the alliance’s Article 5 collective defense guarantee.

However, security concerns have grown since Russia’s March 2014 annexation of Crimea and military involvement in Ukraine, which triggered Western sanctions.

All three Baltic states are home to substantial Russian minorities — numbering 27 percent in Latvia, 5 percent in Lithuania and 25 percent in Estonia — and Moscow has launched military exercises near their territory, bringing Western government warnings of possible aggression.

The three countries have significantly increased defense spending and launched military recruitment drives over the past year. In December, the U.S. Congress approved an additional $985 million for deploying U.S. forces in the region under a European Reassurance Initiative.

Msgr. Klavins told CNS the presence of NATO forces had given Latvians a “sense of greater protection and help coming in,” but added that there was also skepticism about how Article 5 would “play out in reality.”

“This article has never actually been implemented and could be difficult to use against an insurgency,” the church spokesman said. He added that Catholic clergy had learned English to help minister to NATO forces in Latvia.

“Although there’s been much talk of national integration here, it seems this has failed — socially, culturally and above all politically. The patriotic tradition is equated with nationalism here and isn’t very strong. Many people don’t feel this is their country,” he said.

The country was ruled from Russia from 1795 to 1918, and again from 1944 to 1991, when all Christian denominations faced restriction and persecution under a Moscow-led communist regime.

In a December, the president of the Lithuanian bishops’ conference, Archbishop Gintaras Grusas of Vilnius, said all three Baltic states faced parallel threats and “strategic pressure-points” and urged Catholics to “grasp the geopolitical situation.”

“We’re in the front line, and Russia has made its intentions clear — while we feel NATO’s support, we know the front could move forward if the international community fails to stand firm,” Archbishop Grusas said.

“The information and propaganda war which preceded the military action against Ukraine is very much underway here, too. There’s a high degree of tension, and everybody here knows how dangerous the situation has become,” he said.

NEXT: Profit is tool for measuring success, but people come first, pope says