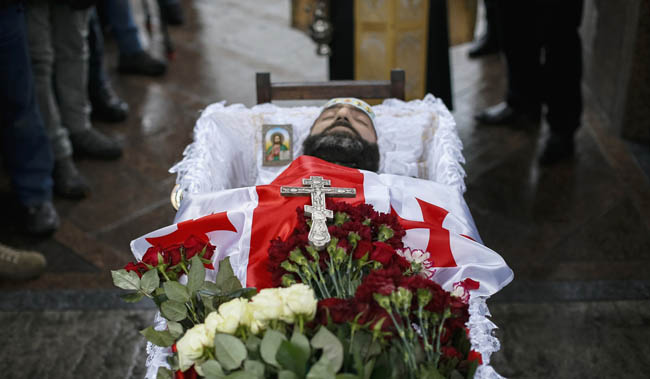 A crucifix and image of Christ are seen in the casket of Georgian Tomaz Sukhiashvili, a member of a self-defense battalion, during his Jan. 21 funeral in Kiev, Ukraine. The United Nations estimated that at least 224 civilians have been killed and another 545 people wounded since mid-January, raising the death toll to more than 5,300 people since April. (CNS photo/Gleb Garanich, Reuters) 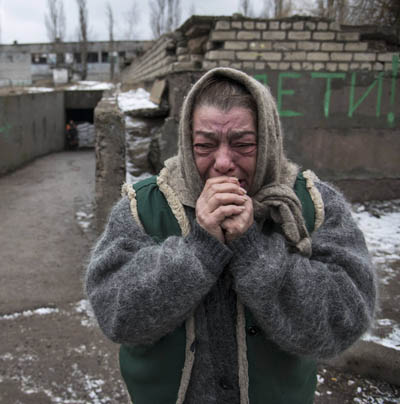 An elderly Ukrainian woman reacts as her acquaintances board a bus to flee due to a military conflict in Debaltseve Feb. 4. (CNS photo/Sergey Polezhaka, Reuters)

VATICAN CITY (CNS) — The only word worthy of being heard in the throes of war is “peace,” and there is nothing more scandalous than a nation made up of Christians engaged in conflict, Pope Francis said.

“When I hear the word ‘victory’ or ‘defeat,’ I feel such great pain, great sadness in my heart. These are not the right words, the only word that is right is peace,” he said, when commenting on the escalation of violence in Ukraine.

At the end of his general audience Feb. 4, the pope noted the worsening and increasingly serious situation in Ukraine.

The United Nations estimated that at least 224 civilians have been killed and another 545 people wounded since mid-January, raising the death toll to more than 5,300 people since April. The U.N. High Commissioner for Human Rights, Zeid Ra’ad Al Hussein, criticized the Ukrainian government and pro-Russian separatists Feb. 3 for bringing the fighting to heavily populated civilian areas such as markets, schools and residential zones.

The fighting began after Russia annexed Crimea in March and pro-Russian separatists, widely thought to be working with the Russian army, then started taking over the far eastern regions of Ukraine.

Pope Francis called for prayers that “this horrible fratricidal violence” end and that all sides, including the international community, step up efforts to resume talks, saying that dialogue was “the only way possible to bring peace and harmony to that martyred land.”

Speaking off the cuff, the pope talked about the pain he feels when the desire for peace is overshadowed by the thirst for winning or vanquishing others.

Turning his words directly to the people of Ukraine, the pope told them to think about what they were doing.

The pope asked people to pray “because prayer is our protest before God in wartime.”