Sisters fight evil of human slavery by aiming at traffickers 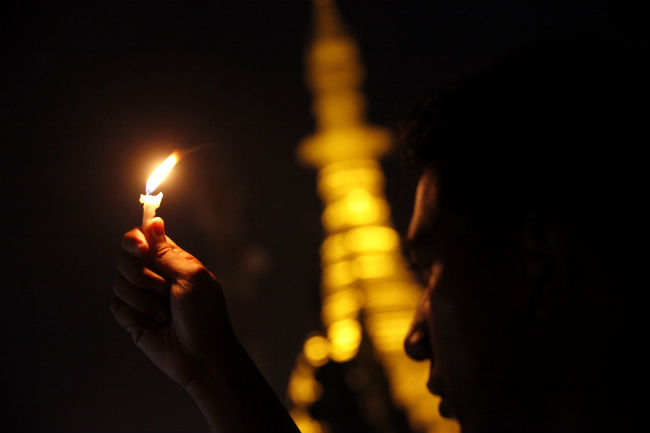 VATICAN CITY (CNS) — Bringing the light of hope to ending human trafficking means confronting the brutal “darkness” of evil that is driving those who exploit others, said a number of women religious helping victims.

Already “thousands and thousands of us are working in networks across the world to dispel this darkness, and it’s not happening, so we have to ask ourselves, ‘What do we do?'” said Loretto Sister Imelda Poole.

Those active in the fight will have to “look at the darkness — the demand, the traffickers, to see if we can work more closely with the police, the justice (system) and, as a church, let us open the doors wider and wider to do research, to really look at the phenomenon, to be as clever as the traffickers,” she said.

She and others spoke at a Vatican news conference Feb. 3 in the run-up to the church’s first International Day of Prayer and Awareness Against Human Trafficking to be celebrated every Feb. 8, the feast of St. Josephine Bakhita.

The International Labor Organization and the U.N. Office on Drugs and Crime estimate at least 21 million people are victims of human trafficking worldwide, and 2.5 million more people fall into the snares of traffickers each year. The ILO estimates human trafficking generates more than $32 billion a year — the third most-profitable “business” after drugs and arms trafficking.

Comboni Missionary Sister Valeria Gandini, who works on trafficking and migration issues in Sicily, said people who pay for sex “have a great responsibility in trafficking” because “they are the ones who directly abuse the girl,” and the money they hand to the prostitute heads straight to the criminal networks running the industry.

She said that as she is ministering to women on the street, she sees men ranging from grandfathers to young teens on mopeds driving up to proposition the women.

“There is a lack of a sense of responsibility” and awareness that their actions have consequences on others, she said.

Often people are ignorant of the coercive hold traffickers have on these women, thinking the women are freely and willingly prostituting themselves, she said.

As part of their work in preventing trafficking, Sister Gandini said they hand out to “clients” on the streets as well as to people in school and parishes a letter explaining the poverty, trickery, coercion and risks to which the women are exposed.

The hope is that helping people recognize the plight of victims, and the need to respect and protect human dignity will help reduce the demand, she said.

“In order to understand what human trafficking is, it is necessary to meet victims, to listen to them, look at them in the eyes, embrace them,” Sister Gandini said.

So often victims “do not ask for help and they live silently in fear and shame — a silence that we find deafening,” she said.

As a way to raise awareness, the International Union of Superiors General, which includes the superiors of some 1,900 religious orders of women around the world, and the Union of Superiors General, which represents male religious orders worldwide, launched the website a-light-against-human-trafficking.info for the day of prayer, asking people to “shine a light” on the often-hidden problem of human trafficking.

Cardinal Peter Turkson, president of the Pontifical Council for Justice and Peace, said the day of prayer is meant to expand awareness and prayer on a global scale “to the very depths of this evil and its farthest reaches” and inspire people to move from awareness to action.

The only way to stop the worldwide crime of trafficking, he said, is to respond in a way that is as far-reaching, global and coordinated as the traffickers.

Women’s religious orders came together to form the international network, “Talitha Kum” in 2004. The network is one of more than a dozen networks that the superiors general have formed to educate and warn potential victims of trafficking, to work to combat the poverty that feeds the trade in human beings, and to rescue and provide shelter and rehabilitation for the victims.

NEXT: Archbishop Romero’s beatification will be soon, official says