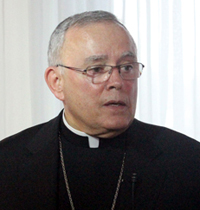 The eight-year veteran of the police department was shot on duty yesterday afternoon in a video-game store at 21st and Lehigh streets and died less than two hours later, according to reports. Wilson was 30, and leaves behind two young children. Funeral arrangements are pending. His two assailants were apprehended and charged with murder.

“I offer my prayerful condolences to his family, his fellow officers, and all those who mourn his loss,” said Archbishop Chaput. “Today, and in the coming days, those whose lives were touched by Officer Wilson will struggle with grief at his death and anger at the circumstances. May God bring peace to their hearts and to our city.

“I pray fervently that the Lord will pour his bountiful mercy on the soul of Officer Wilson and watch over the brave men and women who wake up each day ready to face innumerable and unimaginable dangers for the benefit of their fellow citizens.”

NEXT: Shroud of Turin gets ‘CSI’ treatment at Royersford parish