Shroud of Turin gets ‘CSI’ treatment at Royersford parish 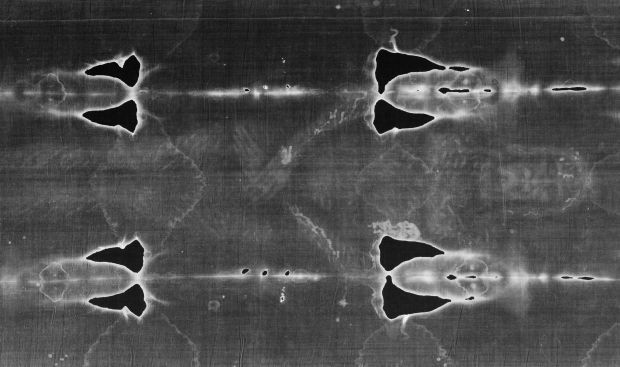 This digital photo of the Shroud of Turin has been inverted to a positive and converted to black and white with enhanced contrast in Photoshop. The image is shown in its original horizontal view. (CNS photo/Paul Haring)

The Shroud of Turin has fascinated people for centuries, and on March 16, one of the world’s leading experts will share his investigation of the shroud at Sacred Heart Church in Royersford.

Russ Breault has been studying, investigating and lecturing on the shroud since he was first intrigued by it in 1980. When he was a college newspaper reporter, news of the shroud and was abuzz and he was immediately taken with the subject, asking if he could write about it. Researching the shroud and interviewing scientists escalated his interest.

Breault says his interest and subsequent expertise in the shroud came from “being in the right place at the right time.” That right place and right time have led to over 30 years of research and presentations like the one he will give on the 16th called “Shroud Encounter, CSI: Jerusalem.”

With a scientific and scriptural approach, Breault explores the science, history and mystery of the Shroud of Turin. Could it be the burial shroud of Jesus? Some carbon dating says no, but the wounds that could only have come from crucifixion, including a crown of thorns, say yes. And if the shroud is authentic, what are the implications?

When asked whether Catholics should venerate the shroud since it hasn’t been authenticated, Breault spoke of the Church’s position – one that he favors and respects.

“The Catholic Church walks a middle path,” he said, explaining that the church does not call the shroud an icon (a man-made image, like a painting) or a relic (an authenticated item). The church regards the shroud as “a symbol of Christ’s suffering worthy of veneration,” he said.

Since the DNA of Jesus is not available to compare to the DNA of the blood stains on the shroud, we are not able to authenticate it with total certainty. “I think it’s a smart path for the church to take, to call it a symbol,” Breault said. “Whether it is the authentic burial shroud of Jesus or represents the burial shroud, it’s worthy of veneration as representing what Jesus did for us on the cross.”

That symbol has been under intense analysis with controversial results. Carbon dating sets the shroud’s creation at the earliest near 1260 AD, but the sample taken for testing was from a corner that had been handled heavily over the centuries and could have been corrupted.

There is no evidence of paint, ink, dye, or other pigmentation on the shroud, adding discredit to claims that it is simply the work of a master artist.

The blood stains are confirmed to belong to a human male with AB type blood, and the positions and composition of the stains show that they belong to a man who died upright – as in crucifixion – and whose blood had coagulated prior to being wrapped in the shroud.

“How did some alleged medieval artist do that?” Breault asked, both as a challenge and with curiosity. If an artist somehow managed to create a forgery with scripturally accurate injuries and bloodstains, then how did he do it?

“Who is he? Because he’s not identified. And what’s the process, because we can’t figure out the process that would have allegedly been used by an artist,” Breault said.

Using the potentially corrupted carbon dating and simple claims that an artist must have made the shroud aren’t enough to prove or disprove anything, he suggested. “That’s not very satisfying from the scientific standpoint,” he said.

That’s why he also follows the historic trail of the shroud and its documented disappearance for a time during the 13th and 14th centuries. If we know where it was in the early 1200s and we know that it went missing for a time, how could it have been created after 1260? These are the kinds of thought-provoking questions that Breault asks and considers in his truly CSI-like investigation.

From analysis of materials on the cloth to its possible connections to Joseph of Arimathea to the utterly fascinating way the image of a man could have been left behind on the shroud, Russ Breault’s passion and investigative stand will impress anyone.

NEXT: 1,300 Catholic men support each other and their faith