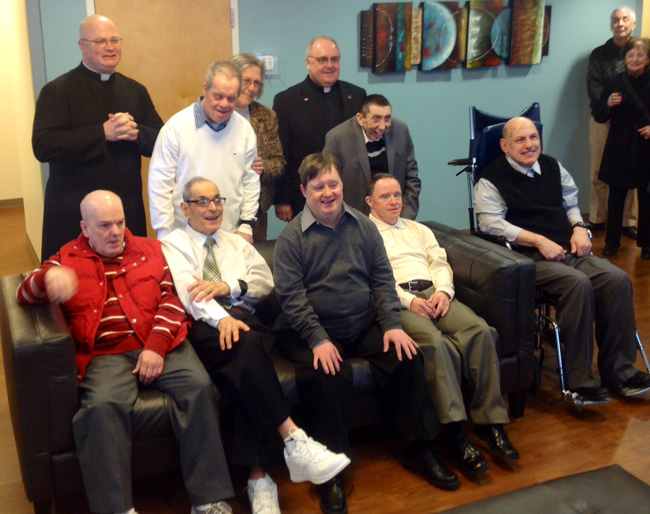 The men of Don Guanella Village's new community home came to Mass on Sunday, March 15 at Our Lady of Charity Parish in Brookhaven, where the group home for middle-aged developmentally disabled men is located. Attending the blessing and open house of the new residence which followed the Mass are the home's men and, back row from left: Father Brian Izzo, parish pastor; a resdient; Patricia Menszak, Don Guanella program director; and Father Dennis Weber, S.C., of archdiocesan Catholic Social Services. 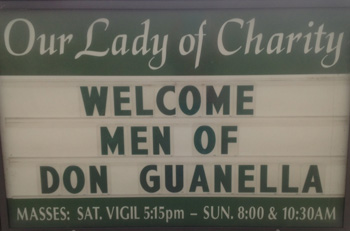 Sunday, March 15, was a great day at Our Lady of Charity Parish in Brookhaven, Delaware County, because the people got to meet their newest fellow parishioners – William, George, Richard R., Jerry, Francis, John, Richard S. and Mark.

They haven’t moved in yet, but they are all developmentally disabled middle-aged men, residents of the Cardinal Krol Center at Don Guanella Village in Springfield.

It is part of the ongoing dispersal of its 110 or so residents mostly into smaller, more home-like group residences throughout the area, including several already established in Downingtown and others located throughout Delaware County.

Freshly built on the Our Lady of Charity campus, the new homes that the men will move into in coming weeks will provide each man with his own private room and they will share bathrooms and other communal facilities. The aim is to better integrate the residents into the wider community.

“I’m excited for the opportunity for the men to be integrated with the parish and for the parish to get to know the men, said Father Dennis Weber, a Servant of Charity who is director of mission identity and integration for the Developmental Division of archdiocesan Catholic Social Services.

So far about 60 men have been placed in nine smaller homes, mostly in existing facilities renovated for this new purpose, but also including a new residence that was opened at Notre Dame de Lourdes Parish in Swarthmore, which like the Don Guanella home at Our Lady of Charity, was built from scratch.

“Notre Dame is going extremely well; the men are very happy and that is our primary concern,” Father Weber said. “The families of the men are also pleased with the homes and the new lives of their sons and brothers.”

Kathy Yeager, whose brother William will be one of the residents, remembers the anxiety and even anger among families when it was announced that Don Guanella would close. Now that she sees the new house and the living situation where her brother will be a resident, it is beyond her wildest expectations. “What a beautiful home and place for Bill to live,” she said.

“It’s been a long process,” said Father Brian Izzo, pastor of Our Lady of Charity, who celebrated the welcoming Mass March 15 along with Father Weber. “We had an open house a year ago September when the process began and our parishioners were excited about it.”

Father Izzo said hosting the group home was really in keeping with the name and mission of his parish. “We are extending charity,” he said. “I’m looking forward to meeting all of the men. I understand each has a different personality.”

The relocation process, which is now nearing completion, began 22 months ago with approximately 50 men still to be placed in new facilities. That includes about 30 men who need more intensive care who will live in cottages on a mini-campus being constructed on ground obtained from Cardinal O’Hara High School adjacent to the Springfield facility.

On the whole, the men who have been relocated “are doing really, really fabulous in their new homes,” said Patricia Menszak, who is administrator for the Don Guanella System. “It’s just like they are doing new things every day in their new environments.”

Actually the men generally do not stay in the homes all of the time. Generally they spend weekdays at programs located at the former school of Our Lady of Fatima, Secane, where they might coincidentally see old friends from the larger Don Guanella.

From a staffing point of view, operating many smaller homes is more challenging because the group homes do not have the economy of scale possible in the larger institution. Although no staff members actually reside at the group homes they are staffed around the clock seven days a week.

“Our staff has had to grow from about 100 to about 175,” Menszak estimated, “but the environment for the men is so much better, especially when they can be involved with the parish,” she said.

They came to Mass today (Sunday March 15) at the Parish, and attended the Blessing and Open House of their new residence in Brookhaven.  Fr. Dennis Weber performed the blessing and Fr. Brian Izzo, Pastor of OLC assisted.  Also pictured with Frs. Weber and Izzo is Program Director, Patricia Menszak

PREVIOUS: Relief worker sees the tragedy, and gratitude, of Syrian refugees in Lebanon