After his two years as pope, ‘Francis effect’ has taken hold 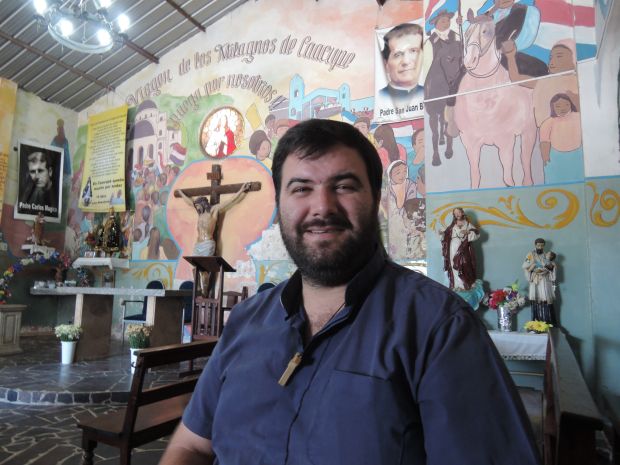 Father Juan Issamendi, who works in the shanties of Buenos Aires, Argentina, poses for a photo March 8. Father Issamendi said Pope Francis' effect on Argentina will be measured in the streets, not by how many people receive the sacraments. (CNS photo/David Agren)

WASHINGTON (CNS) — Within two years of becoming pope, Pope Francis now has an effect named after him.

This “Francis effect” provides both comfort and challenges to Catholics, according to a panel of U.S. Catholic leaders speaking during a March 10 teleconference organized by Faith in Public Life.

“One of the most significant things about Pope Francis is the way in which he is reimagining how the church presents itself to the world,” said Jesuit Father Thomas Reese, a senior analyst for the National Catholic Reporter newspaper.

“If we think back three years ago, and you asked people in the street … ‘What’s the pope concerned about? What’ s the church concerned about?’ you’d get a very different response than what you’d get today,” Father Reese added. “In a sense, he has rebranded the Catholic Church.”

Pope Francis “challenges those on the left and the right,” said Kim Daniels, a senior adviser to the group Catholic Voices. For the right, she added, the challenge is “a fresh look at poverty”; for the left, “a fresh look at how to build a culture of life.”

“Our faith should challenge us,” Daniels said. “The content of Pope Francis’ challenge is resistance to a throwaway culture. This is a call to us to stand for the most vulnerable: the unborn,” she added, but also “the jobless, the migrants, to all who are marginalized. We’re all in this together.”

Sister Simone Campbell, a Sister of Social Service who is executive director of the Catholic social justice lobby Network, said one key point of Pope Francis’ tenure is “his economic analysis that states so clearly that gross injustice requires more than economic growth, it requires changing the processes that protect those who have wealth at the top. He says market forces cannot be left alone. Market forces are a human institution and therefore can be flawed.”

The apostolic exhortation “The Joy of the Gospel” is an adage Pope Francis exemplifies daily, according to Sister Simone. “‘The Joy of the Gospel’ explains how he is leading is in his approach to peacebuilding in our society,” she said. “Just a few weeks into the 114th Congress, I think Congress needs to work on peacebuilding among themselves so they can govern our beloved nation.”

“We need more politicians capable of sincere and effective dialogue and a focus on hearing the poor, seeing the problems. Nothing could be more countercultural in Washington today,” agreed John Carr, director of the Initiative on Catholic Social Thought and Public Life at Georgetown University in Washington. “When he stands before the Congress in six months, he will challenge everybody to think and act differently.”

The two dominant themes of Francis’ papacy are “the joy of the Gospel and the mercy of God. These are different emphases for a church that, frankly, has been tempted by or perceived on fear and focused on judgment,” Carr said. “I think he brings two basic perspectives. He looks at the world and he looks at the economy from the bottom up … and he looks at the church from the outside in. He’s tough on clerics and he’s tough on hierarchs. These priorities are not those of the hierarchy or the Curia.”

“Pope Francis has transformed the public perception of the church that had been seen as “judgmental, shouting a big no at the world. The church that Pope Francis portrays is humble, welcoming, open to the world,” said Stephen Schneck, director of the Institute for Policy Research & Catholic Studies at The Catholic University of America, Washington. “His vision imagines the church as a field hospital … for the spiritually wounded.”

Schneck talked about the pope’s upcoming encyclical on the environment and “how much it’s being dreaded in some quarters.” Already, he said, there’s been “a litany of pre-emptive strikes by conservatives even though not a word has been released,” he added, citing the journal First Things and the Acton Institute among the critics. Schneck said he suspects the pope “will morally validate responses to global warming” in the encyclical.

The Pew Research Center survey on Pope Francis showed that 94 percent of conservative Catholics viewed him favorably, while 87 percent of liberal and moderate Catholics did.

Jessica Martinez, a Pew research associate, said evidence of a Francis effect is “really kind of mixed.” The share of Americans who identify as Catholic between 2012 and 2014 didn’t change, and neither did frequency of Mass attendance.

But “one-quarter said they had become more excited” since Pope Francis’ election, while two in five respondents said they pray more often and one in five said they read the Bible and other religious materials more frequently, Martinez said.

“The pope is not the Catholic Church,” Father Reese said. “For the Francis effect to take hold and really be long term, people have to buy in to what he’s doing. We have to imitate him just as he’s imitating Jesus.”

PREVIOUS: Bishops urge people to pray for those who face religious persecution