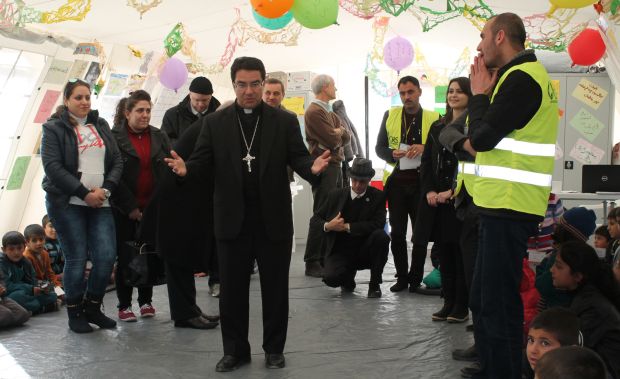 Bishop Oscar Cantu of Las Cruces, N.M., chats with displaced Yezidi children Jan. 20, 2015, outside of Dohuk during a recent visit to the Kurdistan region of Iraq. (CNS photo/Dale Gavlak)

WASHINGTON (CNS) — A U.S. bishop who recently visited with refugees in Iraq told a Senate subcommittee March 11 that a multi-pronged approach is needed to combat a wide range of humanitarian problems including religious persecution.

“Grim statistics are only part of the story,” Bishop Oscar Cantu of Las Cruces, New Mexico, told the Appropriations Committee’s subcommittee on State, Foreign Operations and Related Programs. Although religious persecution is part of the story, he said, “the weakening of the rule of law, and the corresponding rise of extremist groups, many associated with (the Islamic State), created the conditions where religious persecution could grow malignantly, like a cancer unchecked.”

Bishop Cantu traveled to Iraq and spoke at the hearing in his capacity as chairman of the Committee on International Justice and Peace of the U.S. Conference of Catholic Bishops.

He noted that the U.N. Office for Coordination of Humanitarian Affairs reported that in February there were close to 2.5 million people in Iraq who were internally displaced from their homes. Through 2014 at least 11,600 people had been killed in Iraq and another 22,000 were wounded.

Also in February, Bishop Cantu said, Syria had more than 12 million people in need of humanitarian assistance, including 4 million who have fled the country. Syria’s five-year civil war has killed 220,000 people, he added.

In those two countries especially, the bishop said, “religious persecution is a distinct crisis within a wider crisis.”

Other witnesses at the hearing included Rabbi David N. Saperstein, ambassador at large for international religious freedom; Tony Perkins, president of the Family Research Council; and Jay Sekulow, chief counsel of the American Center for Law and Justice.

Rabbi Saperstein said in his written testimony that the repression of religious freedom “is a cynical tool in the hands of the powerful, sowing conflict and violence among people of different faiths, employed sometimes out of sheer group hatred, seeking to repress or eliminate those differing beliefs and practices, but often for the subjugation of political opposition and the control of the politically weak.”

Since he began his job at the State Department two months ago, Rabbi Saperstein said, terrorist attacks in Paris and Copenhagen, “the destruction of Baga, Nigeria, by Boko Haram, and the capture and displacement of Assyrian Christians by Da’esh in northeastern Syria and many other incidents that may not have made the front pages have only reinforced for me that the promotion of religious freedom is absolutely essential for security, stability, countering violent extremism, and conflict resolution both here and abroad.

“Ensuring respect for basic freedoms, and religious freedom in particular, is not just a moral and ethical mandate, but a national security imperative,” he said. “Without religious freedom, there can be no real democracy and no lasting security.”

But such hot spots are not the only places where religious freedom is a problem, Rabbi Saperstein continued.

The long view reveals that “behind each crisis are months, years, and even decades of poor governance, human rights violations, discriminatory laws, neglect, and inter-group tensions,” he said.

“You cannot have freedom of religion if you are not free to express religious views with which others might differ or even find anathema,” said Rabbi Saperstein. “You cannot follow the dictates of your religious conscience if you can be punished for choosing the religion that best reflects your conscience. Yet blasphemy and apostasy laws are growing alarmingly common all over the world.

“In places like, Indonesia, Poland, Ireland, Russia and Turkey, a conviction for blasphemy, ‘insult to religion,’ ‘insult to the religious feelings of believers,’ or similar charges carries penalties of steep fines or incarceration. And in countries such as Saudi Arabia, Pakistan, and Iran, such ‘crimes’ carry the death penalty. These and similar laws and policies carry real consequences.”

In his remarks to the committee and in his written testimony, Bishop Cantu described some of the refugees he met in Iraq, the situations they fled and the circumstances under which they are existing now, including in shelters run by Caritas, the international Catholic relief agency.

Among those he told of meeting were an elderly woman now living in a tent on the grounds of St. Elias Chaldean Catholic Chapel, after fleeing an attack by Islamic State militants. The compound was home to 116 families with 560 people who fled the mainly Christian city of Qaraqosh in August, he said.

The delegation also visited centers operated by Caritas and Catholic Relief Services that were providing materials for housing and cash subsidies, with the assistance of the U.S. Office of Foreign Disaster Assistance.

Bishop Cantu outlined five policies for the U.S. government to adopt in response to the rise of the Islamic State and religious persecution in the Middle East.

Among them, were “confront the reality of religious persecution in the Middle East, where Christians are beheaded ‘for the mere fact of being Christians’ and other religious minorities suffer similarly;” and “recognize that it may be necessary for the international community to use proportionate and discriminate force to stop the unjust aggressors.”

He also called for addressing “political exclusion and economic desperation that are being manipulated” by the Islamic State, scaling up humanitarian and development assistance and accepting “a fair share of the most vulnerable people” for resettlement in the U.S. as refugees.

NEXT: Court says Milwaukee cemetery fund can be considered in reorganization